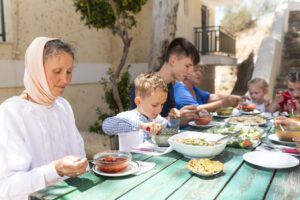 The Hellenic Initiative (THI) has partnered with two of Greece’s leading philanthropic organizations to assist young mothers and mothers-to-be who were forced to flee the war in Ukraine.

There are reported 30,000 Ukrainian refugees who have fled to Greece, 16,000 of which have obtained residency permits.  With THI’s support, SOS Children’s Villages – Greece and Together for Children – Mazi Gia to Paidi, are providing them vital services during this critical time of upheaval and relocation.

Founded in Greece in 1996, Together for Children is an umbrella organization of non-profit NGOs that assists families in need. Since 2012, THI has donated almost $567,500 to TFC in support of a variety of children’s social services.  THI’s support to TFC will assist a total of 20 single mothers and children under age 15 living in a shelter in downtown Athens. THI funds will cover expenses associated with food, toiletries and cleaning equipment, utility bills, diapers, baby milk, shoes and clothing to support these families.

Sofia Kamareta, Program Manager, and Eleni Potamianou, Director of TFC, explained, “we saw how serious the humanitarian crisis was in Ukraine and our Board of Directors decided to intervene immediately to help the refugees who came to our country. We found a space in Athens, repaired it, and prepared it as a guest house for 20 people, mothers and children, to help them get their bearings and to live with dignity.”

Through their relationships with other non-profits, TFC also identified Medin, which acts as an implementing partner for the operation of the guest house.  Kamareta emphasized, “it is vital for the children to survive this period.”

SOS Children’s Villages is an NGO organization active in 136 countries and territories, helping refugee families through access to schools and health centers, and other community-based work. SOS has been in Greece since 1975.  In response to the Ukrainian crisis, SOS established a program to provide support for 60 refugee mothers and children.

THI’s support to SOS Villages will provide 45 out of the 60 persons served with 100 EUR per month for food and 40 EUR per month for clothing. The majority of these persons are housed in the homes of friends and relatives. Some others who don’t know anyone in Greece live in SOS Villages, including one in the SOS Village in Vari.  Additional SOS Villages interventions include establishing peer support groups for new mothers, psychological first aid, supporting their integration, liaising with specialists and assisting them to become autonomous.

George Protopapas, National Director of SOS acknowledged that, “THI came at a very important moment, and through their financial support we can provide the material needs, food and clothing need, because it’s good to heal their souls but you must also feed the children… when THI officials visited the facilities, and they saw the babies in the arms of mothers, they could see that they are really making a difference.” THI has donated $828,000 to SOS to date.

George Stamas, THI Board President, stated: “THI was able to have a real impact on the lives of these families fleeing to Greece to escape the Ukrainian war. The generous gifts of our Board members John Pappajohn and John Georges to THI made this work possible.  It is inspiring once again to see THI’s mission at work: Diaspora Greeks answering the call of need for Greece.”

Andrew Liveris, THI Board Chairman stated: “THI has operated in Greece for 10 years, and we have identified and know which organizations are positioned to respond best to crises such as these, This not only provides help quickly at critical times, but means that our donors’ dollars can be deployed with greater impact.”