The Hellenic Initiative (THI) raised a spectacular USD $2 million+ at its Ninth Annual Fundraising Gala that took place on Saturday, December 4, 2021. The Hellenic Initiative is the leading nonprofit uniting the Greek diaspora and philhellenes internationally and raises awareness and capital for Greece. Held at Cipriani Wall Street, the Gala was back in person and streamed online to an international audience after last year’s virtual-only event.

The Gala focused on THI’s successful job creation efforts and the ways in which THI is helping to shape the new Greece. Funds raised will provide continued pandemic crisis relief and help foster Greek economic recovery opportunities after months of fiscal challenges.

Titled “Moving Forward Together” the event highlighted stories of Greek resilience in the face of adversity. Since its founding, THI has distributed USD $18 million for grants providing crisis relief to underserved communities in Greece and supporting entrepreneurial development programs.

Johnson & Johnson Chairman of the Board and Chief Executive Officer Alex Gorsky was honored during the event. From 1983 to 1984, Mr. Gorsky was stationed in Drama, Greece as part of his military service and learned to speak Greek. A philhellene, Mr. Gorsky was instrumental in developing a relationship between THI and Johnson & Johnson, which has been an essential hiring partner for THI’s successful ReGeneration program since the program’s inception in 2014.

“Johnson & Johnson’s ongoing support of the Regeneration program is an extraordinary commitment,” THI Board Chairman Andrew N. Liveris said. “Much more than an internship program, it offers mentoring, training and employment to young graduates at international companies and community service opportunities with NGO partners. It is all part of our holistic vision to build a modern Greece by providing guidance and career development opportunities for young Greeks.”

“Greeks have always come together to aid those in less fortunate situations,” THI Board President and Gibson Dunn Partner George P. Stamas said. “This was true of immigrants who left the homeland at the beginning of the last century and continues today. The spirit of philotimo (φιλότιμο) — interpreted as helping others and pride in community — is alive and well. We’re proud to be the catalyst that helps the diaspora continue this proud tradition.”

“We are humbled by the outpouring of love and support that continues to propel THI forward,” THI Executive Director Peter Poulos added. “This Ninth Annual New York Gala was a huge success, raising $2 million, celebrating our reunion and paying tribute to our Greek frontline heroes. None of this would have been possible without our Board of Directors, our THI dream team of dedicated staff, and the thousands of donors across the globe.”

His Eminence Archbishop Elpidophoros, the head of all Greek Orthodox in the Americas, opened the evening’s presentation with a moment of prayer.

Sakis Rouvas, one of Greece’s most popular recording artists, performed for a very enthusiastic crowd.

Princess Tatiana of Greece co-hosted the event and introduced compelling and emotional videos that highlighted THI’s new programmatic work including:

She pointed out that during the Greek wildfires THI ran an online fundraiser which, in less than 60 days, raised $700,000 from 4,200 individual donors in 47 countries.

THI Executive Committee member Michael Psaros introduced keynote speaker Peter Diamandis, entrepreneur, philanthropist and X-Prize founder. Mr. Diamandis delivered remarks about climate change and a new X-Prize competition exploring technology that will detect deadly forest fires at the moment of transmission and extinguish them in ten minutes before they have a chance to spread.

A silent auction of world-class art, accessories and experiences donated by Greeks around the world contributed more than $100,000 to the total funds raised.

The famous Jimmy Vali Band provided entertainment and the evening ended with an exuberant celebration of Greek dancing. 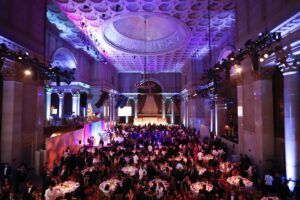 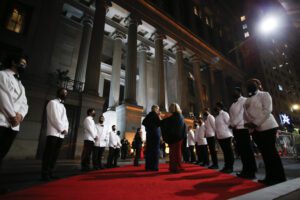 Guests walk to the historic Cipriani Wall Street for The Hellenic InitiativeGala. 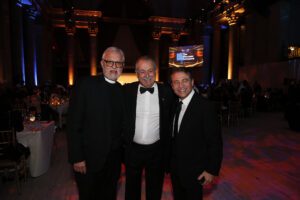 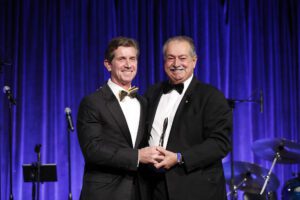 Alex Gorsky, Chairman of the Board and CEO of Johnson & Johnson, is honored with the Prometheus Award, by Andrew N. Liveris, The Hellenic Initiative Chairman. 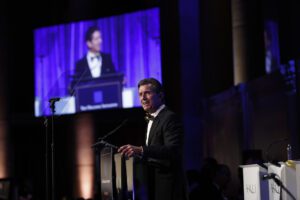 Alex Gorsky, Chairman of the Board and CEO of Johnson & Johnson, offers remarks to The Hellenic Initiative Gala attendees. 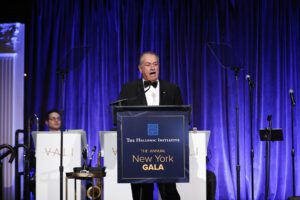 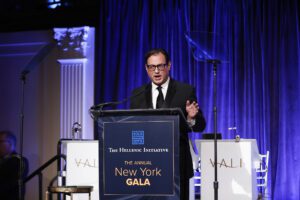