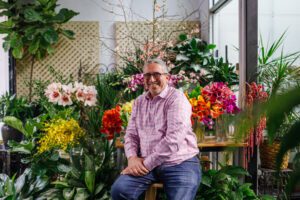 Nic Faitos’ life is an object lesson in seizing opportunities, transforming industries, receiving rewards – and giving back. He is very excited about his most recent discovery – the work of The Hellenic Initiative in his beloved Greece.

Born in Santa Cruz, California, Nic moved to Greece when he was in 6th grade and graduated from high school there. He returned to the United States to attend the University of Florida. Having studied Finance and Economics, naturally his next move was to Wall Street.

His father was a builder and restaurateur and his mother was a medical assistant, so one imagines the ability to reach out to people and spot trends are in his genes. That would explain his success as an out of the blue florist.

He is Senior Partner at Starbright Floral Design, which he founded in 1994, and his Forbes profile says that, “my most proud professional achievement is that in the 25 year history of our company, we have never had a year of negative growth. We have grown through good years and bad. Through the financial crises, through the recessions and through worse.” He is also proud that his son is now his business partner, leading the operational side of the business.

Nic was never directly involved in the industry but after suggesting to his wife that she open a florist, he found himself spending more and more time there. “I saw an opportunity – my passion is marketing and promotion, and advertising.” Observing the operation sparked ideas about what could be done differently. Especially when speaking to corporate and institutional clients like Chase, Delta, and Ernst and Young. “I asked myself what it would take to become florists to the Fortune 500,” he said, adding that in New York in 1994 there was no real competition. “Armed with a cell phone and a briefcase I tested the market by cold calling and opening accounts one by one – mainly in the area of human resources and corporate hospitality and hotel concierge desks.” 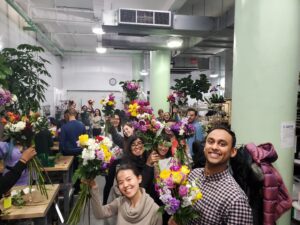 In the beginning he did not have his own flower shop – but by then he had met all the Greeks in the business, and worked with them, putting Nic’s label and brand on their deliveries. “It was a great way to see if my concept was viable for a couple of years.”

As the endeavor grew, be brought more of the operations in-house in and now they have a 7000 sq. ft. location with 65 employees before the pandemic.

Listening to a panel discussion at the Event Expo trade show at the 92nd Street Y, he spied a bio and said to himself “she’s gotta be Greek – Artemis Kohas,” now THI’s Director of Community Development. They became friends, that is how Nic learned about THI. 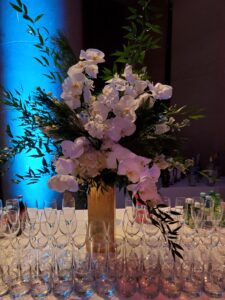 “As I learned more about THI I was quite amazed about the organization – what it does how it works.” At the events he went to, “what impressed me was the caliber of people who attended, the depth of knowledge, and the passion for Greece. Never before have I been in a room that was so singularly focused on one thing that is that important to me. I go to Greece three or four times a year, but to see myself surrounded by the same passion at THI events, it’s quite a story!”

“At the end of the day, when you are around a group of successful people who are gathered for a common goal – and it’s above any self-interest – it draws you in; you want to participate.”

Wanting to be a part of THI, Nic signed up to provide the flowers for the 2021 gala. “Going into the event I told them I am going to discount the work,” offering it at about half price. “When the remainder of the bill came to $9,000 I said to myself, ‘how am I ever going to take money from this organization?’”

The donation was much appreciated, and Nic said, “at the event I had a great time. I met a bunch of nice people and thought to myself again ‘as long as I like the work and as long as they like my price, they have a florist for life.”

It’s his way of participating in the construction of a New Greece. “Good things are happening. There has been a change in the mindset and the right people are in place.”