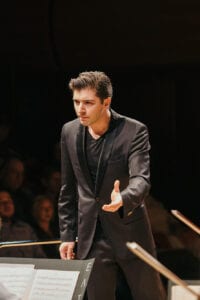 Dionysis Grammenos is Founder and Music Director of the Greek Youth Symphony Orchestra. Founded in 2017, the orchestra aims to showcase and educate young talented Greek musicians in the symphonic and operatic repertoire. Since October 2020, it is the new Orchestra in Residence at Megaron – the Athens Concert Hall.

Dionysis was not raised in a musical family, but being born and raised in Corfu – “I consider it my greatest blessing!” – has spurred and inspired many Greek musicians. “It was the sound of the Wind Bands in Corfu that played a key role in getting in touch with music and loving it so much, however, I do remember from a very young age that my mother enjoyed singing at home and I would say that I felt an unusual familiarity with music, as well as being on stage from an early age.”

Initially trained as a clarinetist at the University of Music ‘Franz Liszt’ in Germany, he has been hailed by Die Welt as “one of the most promising stars of tomorrow.” He made his conducting debut at the age of twenty-one with the Vienna Chamber Orchestra.

Dionysis is very excited about working with the Megaron – the Athens Concert Hall. “This new collaboration marks a new era for the Greek Youth Symphony Orchestra; it marks the recognition of the Orchestra’s hard work.”

He noted that Megaron is a world-class concert venue and “a central pillar of artistic creation in our country and it is a privilege for us to have it as our permanent house.”

Most importantly, he said, “it will be the residence of all our young Greek musicians, a place where we will rehearse and hold our concerts, seminars and educational activities.”

The Greek Youth Symphony Orchestra is funded by the John S. Latsis Public Benefit Foundation and is supported by THI Board member Nick Alexos. Asked about the role and value of institutions like the Latsis Foundation and THI in the development of the arts in Greece, Dionysis said, “the value of organizations such as the Latsis Foundation and THI, but also of other public/private organizations, is undeniable. They play a crucial role in society as they often fill voids that are not sufficiently addressed by governments. By providing funds and support, they help improve human welfare and advance social change. Without their support, many sectors would not be able to exist or carry out their work. Especially the sectors working in Health, Education, Science, and Culture.”

“The valuable support of THI, through the generous donation of Mr. Nick Alexos, will enable GYSO to perform and undertake educational activities in cities outside of Athens and thus engage with a wider audience,” said Dionysis. Alexos made his gift, which will be an annual commitment, during the Call to Action portion of THI’s 2020 virtual gala.

“For our Orchestra,” Dionysis continued, “strengthening its educational activities is crucial. Both for the musical development of our young musicians and for the audience which we seek to further expose to this genre of music. I believe that it is important to make this kind of music accessible to the wider population in Greece. Musical education and/or prior knowledge of symphonic music is not necessarily required to enjoy it. It only requires appetite and curiosity and this is something that we strive to achieve through our activities.”

The pandemic has hit arts communities throughout the world very hard, but there are silver linings. “During the first lockdown, in March 2020,” Dionysis said, “Ι had the chance to visit Corfu after a long period, spend some time with my family, read my favourite books, and enjoy some quiet time, surrounded by nature. Although the second lockdown has been very tough for all of us, and especially for those who work in the arts, I tried to use my time wisely on things I was not able to when life was ‘normal’. I studied more Italian, played chess, and continued reading and learning interesting things.”

And he misses the United States. “Some of the most important musical experiences of my life took place in the USA. I remember my debut at the Carnegie Hall in 2014 as a clarinet soloist, but also my participation as a conductor at the Aspen Music Festival. Both these experiences were crucial in my subsequent development as an artist.”

But beyond that, he said, “every time I visit the USA, I am bewitched and inspired by the special energy, liveliness and style of the people and I seek to bring these memories back with me in Europe.”

Conversations with leading musicians often reveal fascinating facts that are not on their bios and hint at other careers in parallel universes. “The truth is that I started studying physics at the University of Athens when I was 18. I was fascinated, and still am, by this science, which tries to explain everything that surrounds us. I still follow discoveries with great interest.”

His other interests include technology, history, international relations, and also other forms of art. “Undoubtedly, all these interests played a big role and influenced my musical perception and personality. The correlations that are created in our minds and the way in which one gives meanings to the notes, are exclusively based on perceptions, understanding of the world, and finally the knowledge and experiences one has lived.”

He said he realized “one of my big dreams,” however, by “creating a National Youth Orchestra in Greece. The reason was simple, contrary to any other European country, there was no such organization in Greece. It is an essential platform to identify talented young musicians, train them in symphonic repertoire and opera, showcase their qualifications and skills and prepare them for a future career in music.”