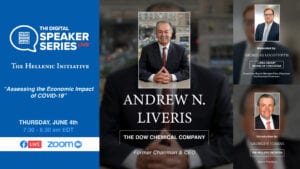 The new Digital Speakers Series of The Hellenic Initiative (THI) continued with a fascinating discussion about the post-Covid world with Andrew Liveris, Former Chairman & CEO of The Dow Chemical Company and Chairman of THI. Nicholas Logothetis, Co-Founder and Chairman of the Board of Concordia, fielded questions from around the world as the moderator, and THI President George Stamas offered greetings.

The compelling hour-long discussion demonstrated that one does not become CEO of industrial powerhouses – and advisor to companies and governments around the world as Logothetis noted –through wishful thinking. Listeners profited from the clarity, depth and far-reaching nature of Liveris’ reply to Logothetis asking, “what sort of economic recovery are we going to see?”

Liveris began by emphasizing the uncertainty that prevails, and he cautioned that, “the headwind on the global economy, the severity of it,” suggests the stock market is gambling…that some sort of recovery is foreshadowed sooner rather than later,” but he said “the best case scenario is not for quick recovery in 2021” but a ‘U’-shaped “recovery beginning 2024-25…if we return to pre-Covid behavior” – an important caveat. He said hopes for recovery “really toggles on humanity returning to its pre Covid behaviors. When will we know that it’s safe to fly again, to go to restaurants, etc.“

Liveris believes a fundamentally different economy will emerge. “All the projections of the use of digital just accelerated…Everyone is getting used to online. Companies are already announcing they will never have offices again.” But not all those jobs will go home. He cited a McKinsey report that said automation and online would destroy 473 million jobs by 2026 – Liveris said Covid accelerated that. Most of those are “minimum wage jobs that are disappearing before our very eyes,” he said.

Tech companies will do well, but he asked, “how does one take care of the displaced population? We have to do something about helping the people most affected by the Post-COVID world” – and the negatives will cascade to everyone in the economy. “Income inequality, this split between the rich and poor, and the disappearance of the middle class” preceded Covid and those trends just accelerated.” Changes he sees as inevitable include people leaving urban areas, a decline in mass transit, air travel in general, and in international travel – especially business travel. Borders will close and immigration will stop. On the broader political front, he said the lack of leadership in the center has to be filled somehow.

COVID THE EQUIVALENT OF A WORLD WAR

He pulled no punches: “Humanity…is in the middle of a crisis equivalent to a World War…Will we come out of it and fix humanity is the big question of this period. Where is that leadership going to come from? Who’s going to the create the Marshall Plan equivalent in a post-Covid world?”

When asked about prospects for a U.S.-China Cold War Liveris reminded that serious issues between them preceded Covid, noting they represent two sets of rules, different economic ecosystems in the world between which nations and companies “will have to start to making choices…Western companies and countries will be comfortable playing by the rules of the United States, but the fact that the U.S. is changing dramatically is a compounding factor. The U.S. is no longer the U.S. of multilateralism…helping other countries – it’s out of that business. I don’t think the election in going to change that.”

Responding to Logothetis’ request for a positive note, Liveris waxed philosophical and practical about “Greece’s response to Covid,” about the MItsotakis government’s actions, and the citizens’ “rediscovery of the things we care about: a sense of community and protecting each other” and being able to count on family, friends, community.He also sees a brighter Greek economic future, citing companies shining in the IT sector, but for the now-crucial tourism industry, “this is a pivot moment” which could speak to its advantage” if Greece can shift away from mass quantity tourism. “People will want nutrition, safety, space. Tourism will pivot to a quality, not a quantity sector.”

The challenges and opportunities for the EU also loom large in his thinking. “It is a great time for the EU to step up…get around the table and figure out how every nation in the EU can benefit” from the Covid stimulus measures. The EU must “decide which regions are best for different economic sectors…let’s create an EU incorporated” with a comprehensive industrial policy. There is hope because Covid exposed supply chain vulnerabilities. “In certain critical areas,” Liveris said, you better have onshore capability…that means the Innovation Agenda will be ramped up…countries that direct funds to innovation and R&D and those companies that innovate faster will succeed.”

The necessary overhaul of education systems that an innovation economy requires, and the rebuilding of healthcare systems Covid exposed, illustrate for Liveris the need to reverse the denigration of government, especially in the United States. He said, “capitalism and democracy were going through a divorce. They separated,” but Covid has shown “that markets left to their own devices won’t distribute capital” in key sectors. “Government will have to step in. Healthcare and education must be at the center…we cannot be leaving people behind. Market economies don’t do that without government rules.”