The supporters of the Hellenic Initiative (THI) around the world responded strongly to its call to come to the aid of the people of Greece who were affected by the devastating fires of the summer of 2021. Mobilizing through the press, social media platforms, and especially its New Leaders young professionals group, $600,000 was raised by the global nonprofit organization that brings together Diaspora Greeks and Philhellenes to address current crises and invest in the future of Greece.

THI then identified partners and projects that meet the needs of people on the ground today, strengthens Greece’s capacity to fight fires tomorrow, and heals the wounded Earth. THI’s Venture Impact Awards (VIA) support not-for-profits and for-profits that are also focused on giving back. After the 2021 fires, THI was able to recruit one of the 2020 VIA winners – Apiceuticals, pioneers in turning the output of bees into exceptional skincare products – to help a community badly hurt by the fires.

Beekeepers in several regions in Greece lost their livelihood, but now THI is helping nearly 2 out of 3 beekeepers affected by the wildfires in Laconia and 1 out of 4 in Evia. Apiceuticals is responsible for: the purchase and delivery of 550 THI-branded beehives – 100 of which have already been delivered, bee breeding and queen rearing, training, and logistics.

True to THI’s goal of not only assisting people today but helping them build a brighter future, these bee farmers could hit revenues of roughly $200,000 in the first year and double this number in year 2.

When possible, THI also helps the Greek state and municipalities build capacity for better serving their communities and responding to crises. In partnership with the Greek authorities and the Greek Fire Service THI identified a need to purchase pickup trucks suitable for transporting firefighting commando teams during emergencies. THI is in the process of ordering five of them, with delivery expected later this year.

The devasting fires that regularly ravage Greece threaten lives and upend families, and in their wake they also leave a scarred Earth that not only wounds the spirit of a community but also increases other dangers, like flooding. The lost trees must be replaced.

As part of THI’s efforts to make Greece a greener country, fight climate change, and stimulate the economy – especially in the countryside – the organization has committed to planting trees that will speed nature’s recovery and generate income for the locals. THI’s staff has identified a team that will help them plant trees in areas where they are needed the most.

This effort will be part of a much wider campaign that THI will launch inviting people from across the globe to contribute to the reforestation of Greece. In exchange for their donation, they will receive a certificate that identifies the tree they helped plant in the Homeland.

Andrew N. Liveris, THI Board Chairman, stated, “After the Mati fires in 2019, thanks to the generous support of over 548 donors The Hellenic Initiative was able to raise over $200,000. Last year our friends and supporters came through once again – 4200 donors donated $600,000 and we can’t thank them enough.”

George P. Stamas, THI Board President, stated, “With these endeavors, THI’s unmatched ability in the Diaspora to both raise money and identify the best way to use those funds for the short and long term needs of Greece and its people is on display in a very moving way.”

Peter Poulos, THI’s Executive Director, stated, “once again tragedy reminds us of our unwavering commitment to Greece. The people of Greece appreciate that they can always depend on the generosity of our supporters and the vision of THI’s leaders.” 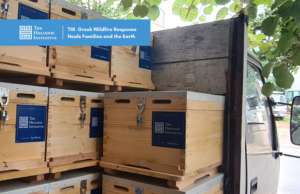