Some of Greece’s most promising start-ups presented their companies to investors from Greece and around the world at The Hellenic Initiative‘s (THI) 6th Annual Venture Fair, the only American-style pitching event of its kind in Greece.  The Venture Fair was held at the Grande Bretagne in Athens on July 11.  In addition to the 10 competing companies in industries ranging from biomedical data markers to technology-accelerating applications, the program included two panels. One entitled “Global Energy in Transition” featured Alex Patelis, Chief Economic Advisor to the Prime Minister of Greece, Andrew Liveris, former CEO of Dow Chemical and THI Board Chairman, and Georgios Stassis, CEO of the Public Power Corporation of Greece, Greece’s largest company. The panel’s host was Mr. Aris Candris, former CEO of Westinghouse Electric Company and THI Board member. The second panel addressed entrepreneurship and the dynamics of the Greek ecosystem and featured investors Miltos Kornaros of Southbridge and Alex Fotakidis of CVC, along with the CEO and COO of Skroutz, one of Greece’s breakout success stories, George Hadjigeorgiou and Yannis Alivizatos. The panel’s host was Marianna Skylakakis, herself an entrepreneur, and CEO of AthiNEA.

Start-up Feel Therapeutics won the $25,000 prize sponsored by The Hellenic Initiative and The Public Power Corporation of Greece. This startup develops digital biomarkers and therapeutics to provide objective data for the diagnosis and management of mental health.  FEEL Therapeutics utilizes a proprietary mobile device that detects emotions and produces digital interventions to provide mental health support on a real time basis.

In the evening of the same day, The Hellenic Initiative hosted a cocktail reception at the Zappeion Megaron where friends, participants and supporters of the wider “THI family”, members of the Greek Diaspora from all over the world, as well as senior executives of the largest companies in Greece were present.  Among the VIPs who attended the reception were the new U.S. Ambassador to Greece Mr. George Tsunis, Prince Nikolaos and Princess Tatiana, numerous Ministers of the Government, as well as other prominent members of the political, social and business life of Greece.  The guests also had the opportunity to meet the participants of Venture Fair 2022, as well as laureates of previous events. The Greek Youth Symphony, sponsored by THI since 2019, and founded by 23-year Dionysis Grammenos, inspired the audience with their performance. The night continued with the sounds of DJ Avgoustinos Galiassos entertaining an enthusiastic crowd.

Andrew Liveris, THI Board Chairman and George Stamas, THI President issued a joint statement, “The last few days have been a celebration of an amazing journey for The Hellenic Initiative and its partners and supporters. We have changed the way the diaspora view Greece. We have helped Greeks in need. We have created jobs and opportunities in Greece. We are part of the restoration of Greek pride and position in the international community of nations. We have a lot more to do and achieve, and what we all have experienced these last few days is how ready we all are to take this amazing partnership, between THI and Greece, to the next level. Oli mazi ”

Bill Clinton, former president of the United States of America, said through a video message: “Since his birth – in the midst of a deep economic crisis – The Hellenic Initiative has been an important partner of Greeks helping to recover, create prosperity and address major challenges such as the needs of social welfare and the pandemic. The common denominator of all these actions, however, is the strengthening of the ties of the Diaspora and Greek-American friendship. At a time when people around the world are moving away from each other, The Hellenic Initiative promotes cooperation, solidarity, and the union of people for a better common future. We work together to build together, not to tear down.”

Mrs. Marianna V. Vardinoyannis, UNESCO Ambassador and Founder and President of the Association of Friends of Children with Cancer “Elpida”, also stated through a video message: “What makes the work of THI unique is the fact that each of its members share the same vision. The vision to create and invest for a better future for Greece. I personally feel very honored, as a member of the Board of Directors of The Hellenic Initiative, and grateful for the support that “Vision of Hope” has received.

Nikos Koumettis, President of Europe for the Coca-Cola Company, and THI Board Member, discussed Regeneration, one of THI’s signature programs and its impact on Greece. “The Hellenic Initiative believed in ReGeneration’s vision from the very beginning and has consistently supported the program, offering a better future for Greek youth. With the support of THI, through ReGeneration, more than 2,700 young graduates have been placed in more than 950 companies across Greece, while 700.000 hours of skilling have been offered and almost 20 million euros have been given in salaries to the graduates hired through the program. I feel particularly proud that as a member of the THI BoD, I am part of an organization that meaningfully shows its passion and love for Greece!”.

The next day, on July 12, THI’s new program “Plant a Tree in Greece” organized a morning service event on Hymettus Mountain outside Athens, for the care of more than 2,200 trees planted by THI last May.  This is part of THI’s newest and ongoing campaign to restore the lands of Greece affected by the wildfire crisis of 2021 and to restore economic opportunity to farmers who lost their trees and livelihoods in the fires. A total of 4,200 trees have been planted so far under the auspices of this THI program, and a new tree planting is expected to take place next autumn. THI concluded the 2-day program with the first Athens event of its global New Leaders program, a network of Greek and Diaspora young professionals, ages 25-45. 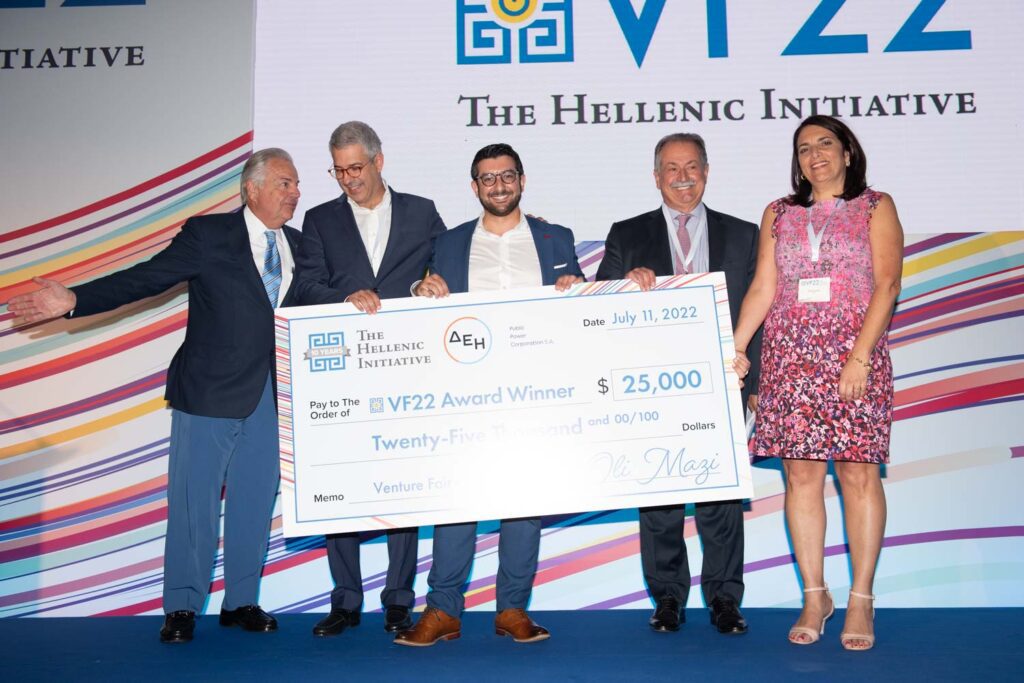 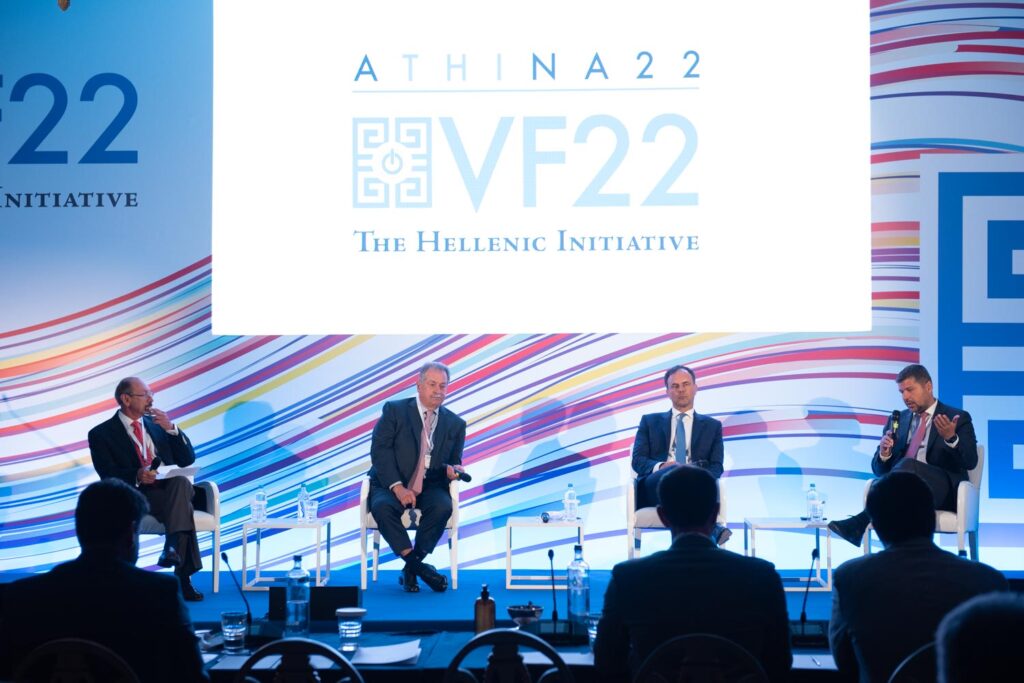 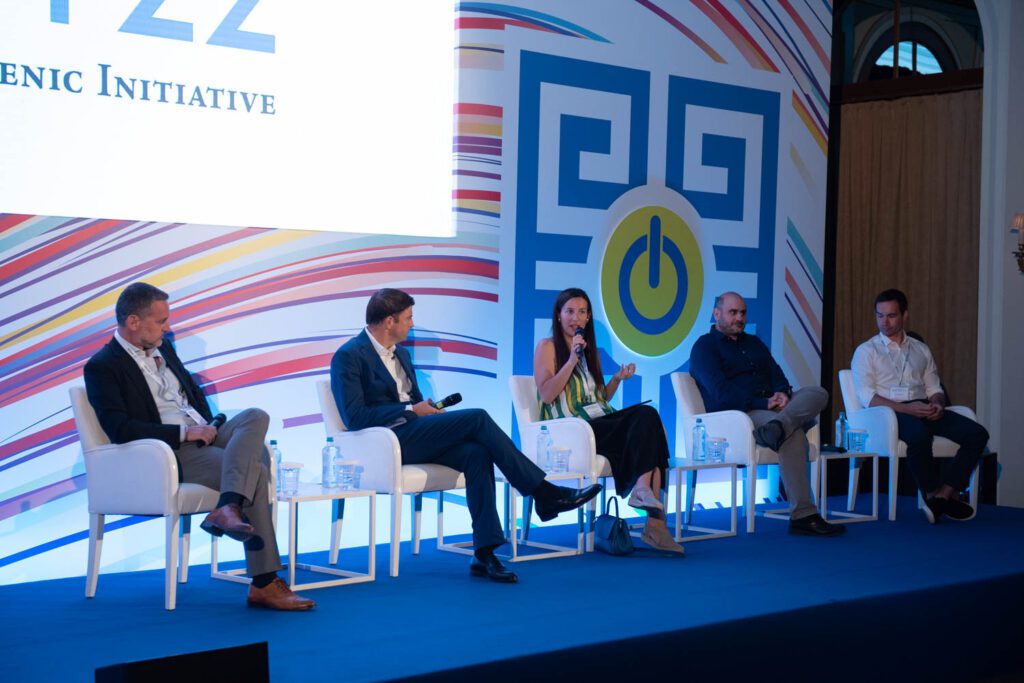 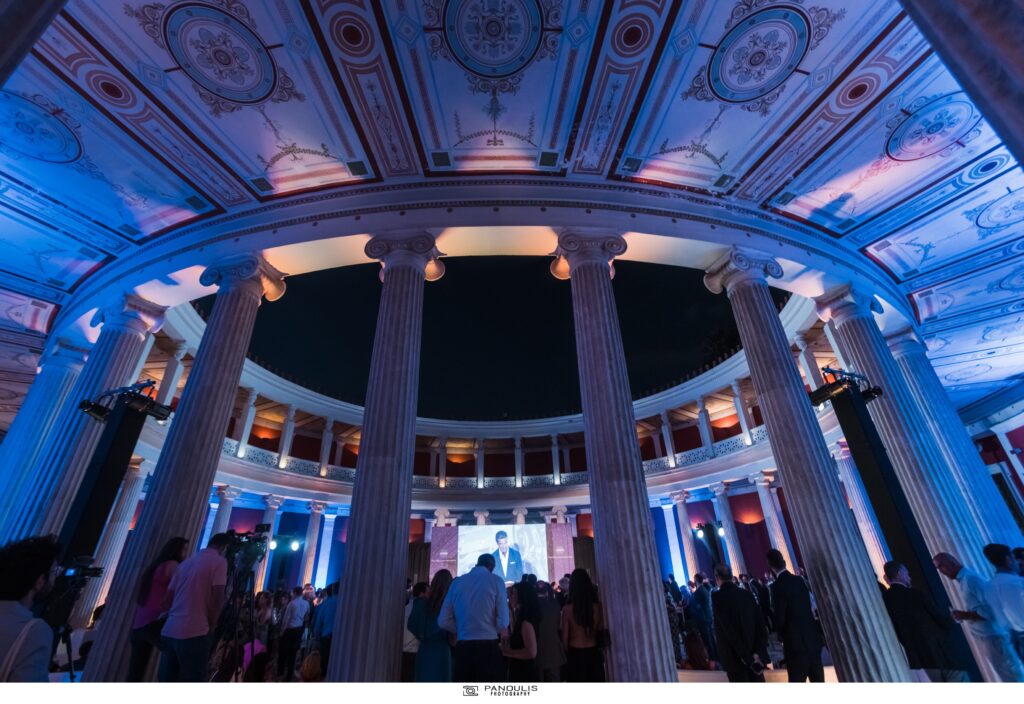 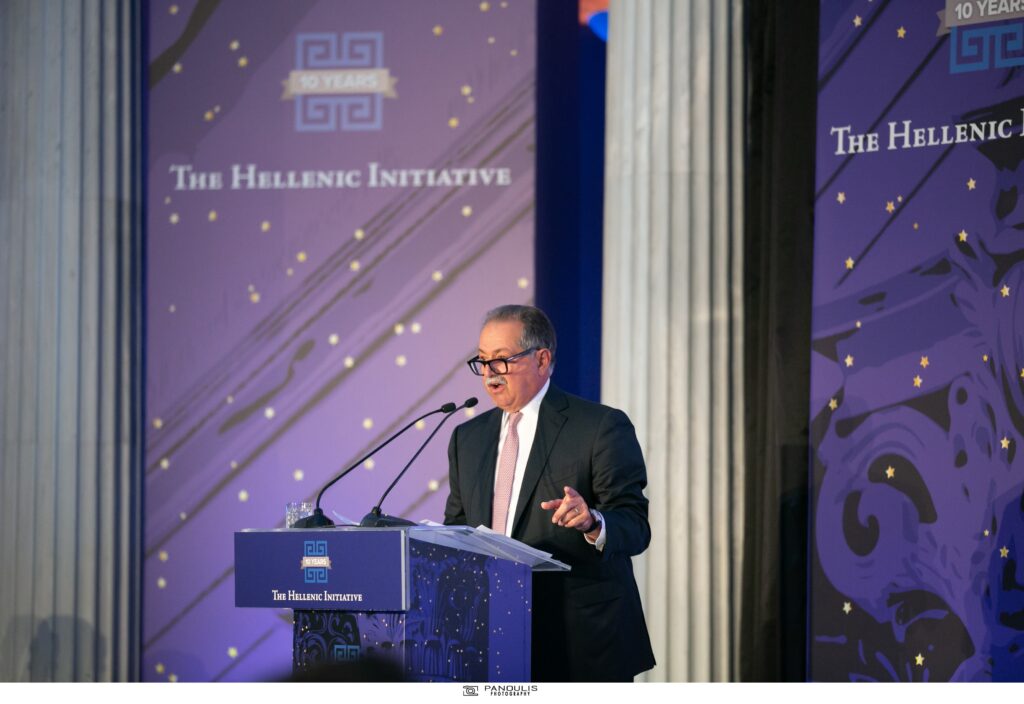 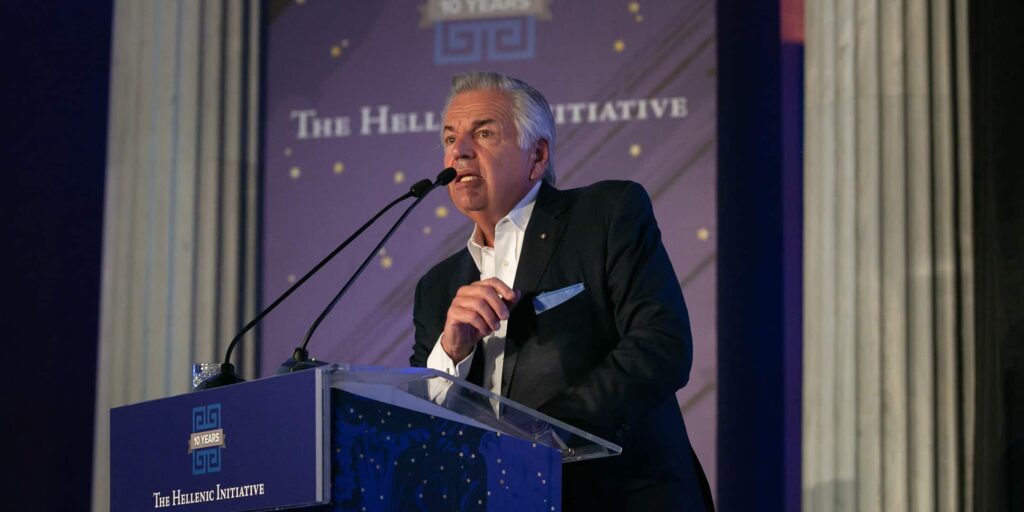 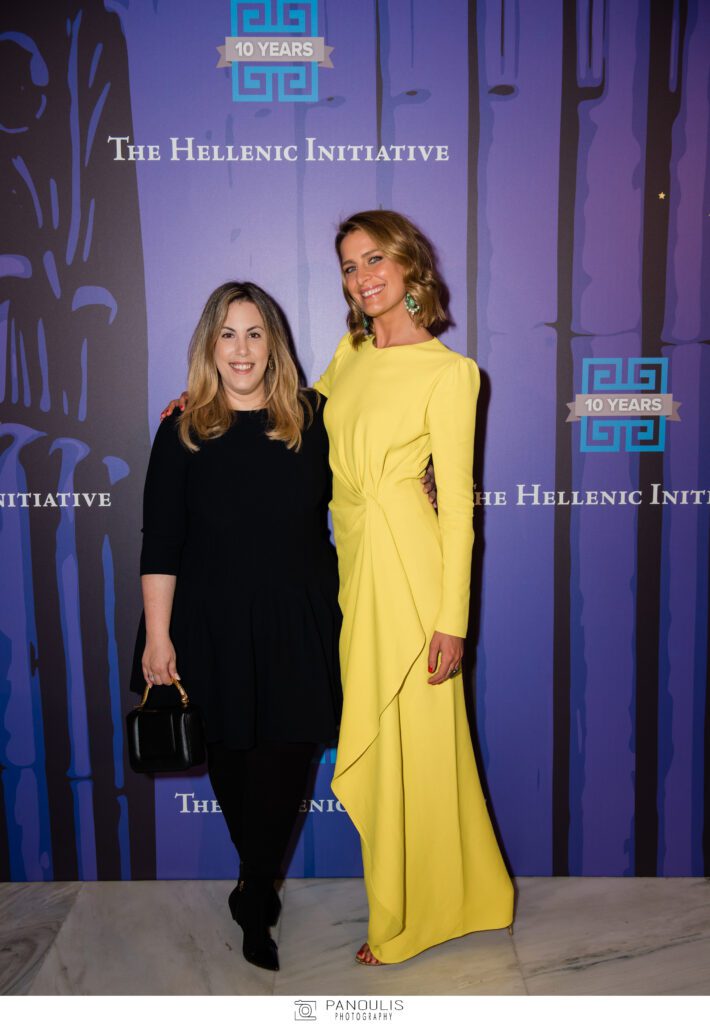 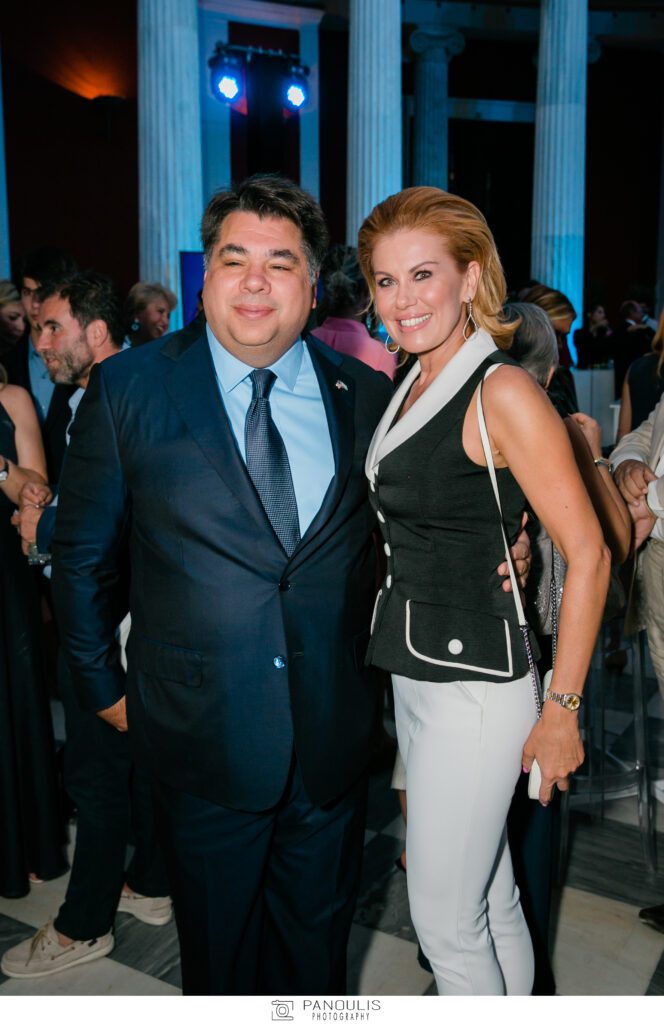 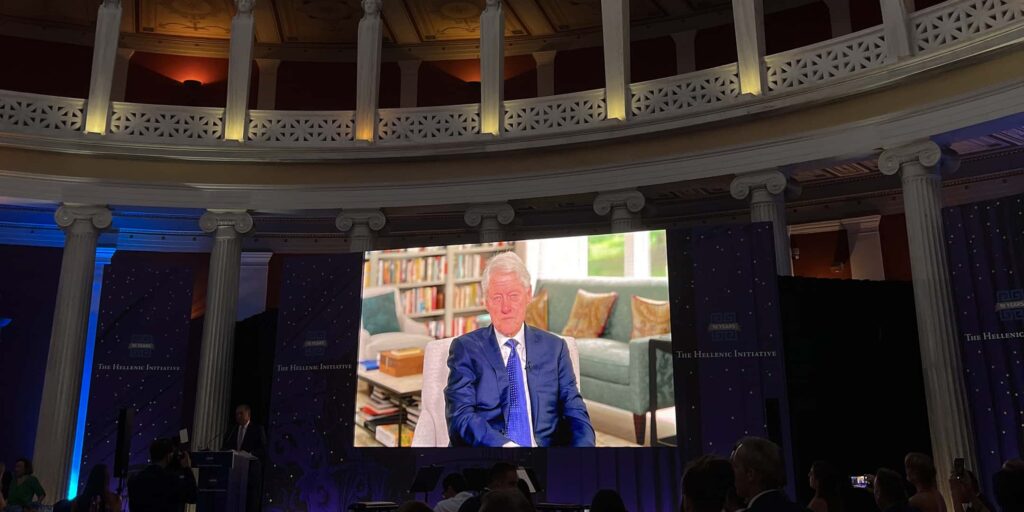 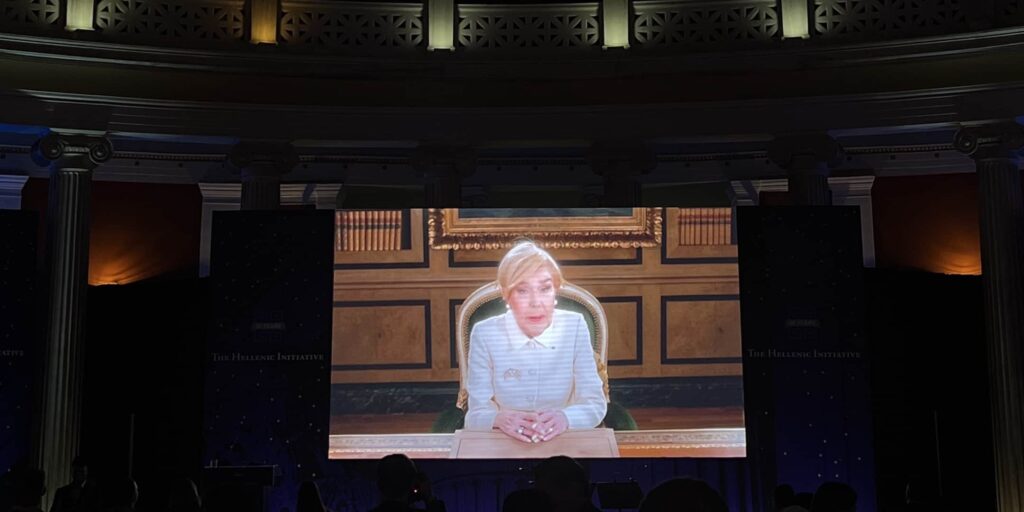