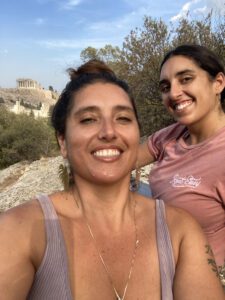 Eva Miranda and Zoe Soter are among the many young people of Hellenic descent in the Diaspora for whom The Hellenic Initiative is becoming a dear and necessary link to the Homeland, helping them meet fellow Greeks on each side of the Atlantic and enabling them both to help in moments of crisis and to build a brighter future.

When the news hit last summer summer of yet another outbreak of wildfires in Greece, naturally the sisters thought of THI as a trusted vehicle for making donations – but this year’s disaster struck close to home, and like more and more THI supporters, they felt they must do more than just write a check.

“When THI began to do fundraisers for the wildfires,” Eva said, “Instagram became my tool for keeping up to date,” and then our village Marathea, just outside of Gythion, was in danger. “The fire went straight through the village, destroying most of the land surrounding it. Our house is OK, but we were very lucky.”

Relief and gratitude evolved into a sense of obligation. Zoe said, “I decided to do a fundraiser of my own – we had a garage sale and raised a good amount of money. I donated half to THI and brought the other half to the mayor of our village.”

Zoe humbly noted, “we were not among the top donors, but for a garage sale it was pretty good.” And Eva was delighted to add, “I did get a personal thank you email from Peter Poulos,” THI’s Executive Director.

Few would say that they are 12 years apart, not just because their appearances do not reveal age difference, but because of how intertwined their lives and interests are, most recently, regarding Greece.

Zoe said that while they did not go often when they were children, “we have grown a deeper fondness for Greece, visiting seven of the past 10 years. A few years ago we stayed alone in Athens for three weeks to study Greek at the Athens Center and that really changed our perspective. Last summer we went to the village by ourselves. We practice our Greek, build connections, maintain our relations – even with 4th cousins.” 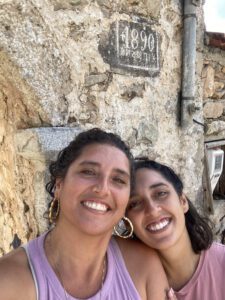 Eva is a jeweler. Asked about her path, she said, “I have always been artistic… and interested in beauty and art, and adornment, style and fashion. I was about 18 when I started working with beads. A couple of years later I said, “I better start selling this stuff because I am spending real money on this hobby.” That is when she began to sell small items to stores, friends, and family.

Zoe shared some of that. “I also make jewelry, but not currently – I didn’t have a business but in high school I was doing metal smithing and jewelry.” She actually stimulated her sister’s pre-existing passion for jewelry at that time and for a few years they were working together. “I hope one day we will get back into that and make some sister-stuff together,” Eva said.

Zoe is a yoga instructor and cofounder of the Body and Soul Yoga Collective in San Francisco, where she and Eva were born and raised. Of course, Zoe said, “my sister took me to my first yoga class” – but it was not love at first stretch. Zoe, a soccer player, entered class with an athlete’s mind-set – and she recalls asking herself, “are we really going to sit here and just breathe…really just listen to our thoughts. What is this?” Intrigued at some level, though, she stuck with it, and when she moved home from college and needed an outlet, she was drawn to the studio near her home, going several times a week. “It really called to me in a way I didn’t expect.”

After two years of consistent practice, she really took the plunge. “I decided to go on a retreat to India with my teacher – and that turned everything around.” And then she dived in deeper. “When I am into something, I really want to know all about it. And there was a spark…then I said to myself ‘yes I want to do the teacher training.’ I traveled all over the world. Seeing how I could relate to people all over the world in this very special way was incredible.”

Eva also does yoga, though a different style. She theorizes the two of them are ‘close’ precisely because their ages are far apart. “No competition for toys and love. I was 12, so I had my time as the only child and I was just waiting for a sibling. I was excited.”

The pattern continues, now  in their Greek language pursuits – and with THI. “Our father had a good command of Greek, but he said, ‘I need to get better,’ so he started going to City College and I followed a year later,” said Eva. They continue with a Zoom tutor.

And so it was with THI: “Our dad was following the newsletter, Zoe said, “and then we connected with Peter Poulos.”

Eva interacts with THI mainly via Instagram. “It was good for me to observe the Diaspora Greek experience because we don’t really have Greek-American young friends and there aren’t that many in the Bay Area – it’s different from living in New York – for me, my reaction was, ‘cool! Look what this person is doing here and that person is doing over there,’ and there is this THI connection across the world.”

Their enthusiasm for one another’s endeavors knows no bounds. “I want to tell you,” Eva said, “because Zoe didn’t – she is planning to do a yoga retreat in our village. It’s amazing. This village is so tiny – 50 inhabitants – and these people built a whole retreat center there – a hotel that can house anything.”

Zoe nodded. “Yes, there is actually a retreat center in our village. It’s beautiful and I plan to bring a group there next year. I feel incredibly excited about bringing people to Greece now that I have spent so much time there. I want to show them around and give them an authentically real experience while also offering yoga as a way of letting everything else drop away so they can just be ‘present’.” Her website is bodysoulyogacollective.com/wandering-zo.

And Eva, whose site is www.earthmajesty.com, said “we will be back in Greece in May when I hope to apprentice with a jeweler.”