Dog’s Voice: “Learn to love like I do, and the world will be a better place” 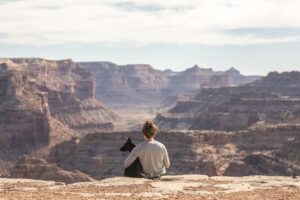 Prick up your ears and listen to the words of a dog. Yours, a neighbor’s, those of a stray. They all say the same thing. They are all telling the truth, “Learn to love like I do, and the world will be a better place.” Enviable conversations accompanied by incessant tail wagging, a lolling tongue by the side of their snout, and a smattering of kisses to anyone paying enough attention.

Dogs (and allow me to add cats) are the best friend a human can have, and they have a right to live well by our side. Their wellbeing in Greece is no longer a mere formality, but it is not yet an unimpeached right. However, things are improving.

Dog’s Voice is a non-profit organization that supports the work of over 100 animal charities throughout Greece. It runs the largest network for the promotion of the adoption of stray dogs, it implements a complete program of protecting urban fauna at the local authority level and provides legal support to cases of animal abuse. It can be credited with over 3,000 successful adoptions of stray dogs, the donation of over 35 tons of food to animal shelters, and the raising of more than 11,000 euros through its campaigns to support stray dogs in emergencies. 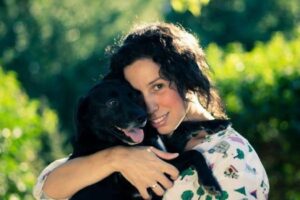 It was recently celebrated as an award-recipient at the Venture Impact Awards by The Hellenic Initiative, for its contributions to improving the fantastic world of our quadrupedal friends. We are given a tour through this world by the organization’s Founder & Impact Development Manager, Elena Dede.

Are Greeks animal friendly? During your seven years of operation at Dog’s Voice have you seen a significant change in people’s relationship with dogs?

Greeks have become particularly sensitive to issues of companion animal abuse, with young people leading the way. This is particularly true of the relationship between humans and dogs, where society has developed better reflexes than it had in the past. However, unfortunately, there are still many cases where animals continue to be treated as tools or objects. We are optimistic that animal welfare education in our country will impact more and more people of all ages in coming years.

Do you believe that new legislation on animal abuse has contributed to the better treatment of animals, or do they continue to suffer in various areas of Greece?

It certainly acts as a deterring factor, and it gives us a toolset in our efforts to report these incidents and successfully protect animals. However, there is a deeper issue. It is the perceived discrepancy of power in our relationship with animals which leads people to leash dogs to barrels, yards, or rooftops. We do not respect animals as equal, feeling beings. That is the root of their abuse.

What is your response to those who say, “you cannot have a dog in an apartment”?

That is a big myth. Dogs love routine and they can adapt to our daily life, if we cover their basic needs. These include taking them out for a walk, exercise, socializing with other humans and animals, appropriate food and veterinarian care. Their basic needs have nothing to do with the square footage of one’s home.

And to those who prefer pure breeds?

We do not judge anyone’s choices. Every day we try to ensure that people who prefer purebred animals purchase them from legal breeders, and not from “backyard” breeders or online. However, we would still like it if these people could visit an animal shelter before they do so, even for just 30 minutes. We are sure that all the answers can be found at the shelter; that they can really find an animal that will change their life there. Adopting a stray is an act of love that gives strength, hope and gratitude to the adopting person. That is why we adopt and we do not buy.

Dog’s Voice supports and collaborates with 117 animal charities. What can we take away from the existence of the so many organizations?

Without these animal charities, our country would be an international embarrassment when it comes to animals. It is thanks to these animal welfare communities that animal rights have been won, that the mindset of the average Greek citizen has changed, and that the state has been pushed to do its job at a higher level. This has literally saved millions of animal lives that previously had no chance. Animal charities are a manifestation of a civil society that seeks to be vigilant, to intervene, to rescue, and to fight for the rights of animals. As more animals suffer, more organizations will appear. Our goal is that one day, we, as an organization, will cease our activities as we will no longer be required.

Are there animal charities that, instead of taking care of animals, abuse them?

No. There are individuals who, thinking that they are helping animals, end up taking on more than they can manage, resulting in a lack of proper care.

Our experience has shown that everyone is capable of both the worst and the best in human nature, and we do not want to lean into stereotypes and be unjust to anyone. For us, the most extreme act is for someone to have an animal and torture it, abuse it, or abandon it and leave it helpless, especially now that so many volunteers and organizations are there to support them in their efforts to find a better home for the animal. What always shocks us is violence. Something that, unfortunately, we have seen in all types of people.

We are very close. Sterilizing our animal companions is necessary, at least for a few years, in Greece until we can manage the existing population of stray animals.

What led you to the founding of Dog’s Voice?

When we set out in 2015, we wanted to create a tool for someone who is looking to adopt a dog. By using our platform, they would be able to quickly and easily find an animal that suits them and adopt it. We saw hundreds of posts getting lost in the sea of social media, and we tried to help volunteers and animal charities to promote their animals in an organized fashion. We have grown a lot since then and have undertaken other programs and activities, however even today there are over 6,000 people daily who use the Dog’s Voice platform to find a dog.

If a dog could talk, what would they say?

Learn to love like I do, and the world will be a better place.

Venture Impact Makers: a series of interviews by αθηΝΕΑ with the winners of this year’s Venture Impact Award (VIA) of The Hellenic Initiative. The VIA aims to support Greece’s brightest and most talented teams, helping them create ventures that are scalable, sustainable and able to demonstrate not just a quick return on the investment but also a broader impact on the society at large. VIA was founded with the initial support of The Helidoni Foundation and the Estate of Charles C. Condes.