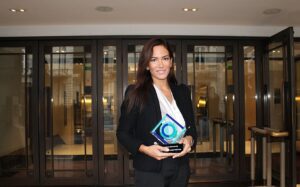 The National Herald and The Hellenic Initiative, have begun a partnership to introduce the NEXTGEN of Greek/Cypriot ‘movers and shakers’ to the rest of our Diaspora community around the world. Established to inform its readers about all things related to our homeland and its respective communities throughout the world, TNH is now providing THI’s New Leaders (40-years-old and younger), with a new platform to showcase their ideas and to engage their communities in a deeper, more meaningful way while simultaneously building a bridge to Greece and Cyprus. Our next featured New Leader is Christina Stampouloglou. Get to know her below!

What city do you live in?
London

Where in Greece are you from?
Athens

What motivated you to get involved with THI?
Ever since my early years in London I have been actively involved in charitable activities aimed at supporting the homeless people in Athens during the financial crisis but also to raise awareness about the humanitarian crisis of refugees seeking safety in the Northeastern Aegean islands. Having followed THI’s work through the years, I have also been amazed by their hard work in support of economic revitalization and encouraging entrepreneurship in Greece, among other causes.

What do you hope to achieve through THI?
I’d like to help bring together Greeks and friends of Greece from around the world with the aim of getting them all to work towards a common goal: helping those in need and creating the conditions for young Greeks to have a better future.

Favorite activity to take part in where you live?
In my free time while in London I play squash, I also box and explore the cultural and culinary scene of the city.

Favorite place to take your non-Greek friends when they visit you in Greece?
The tiny neighborhood near the Acropolis called Anafiotika, where we can wander around the little white and blue streets, and then sit on the top of the hill next to the Parthenon and enjoy the breathtaking views.

Favorite Greek product you can find outside of Greece?
Greek Olive Oil

One piece of advice an elder has given you that has proved invaluable?
Listen more than you speak

Favorite quote from a Greek philosopher?
“The measure of a man is what he does with his power”

How has your Hellenic background helped shape who you are today?
I have been blessed with heritage from all around Greece coming from my grandparents, each having given me through their life experiences the unique skill of understanding, empathizing, and building genuine connections with people from different backgrounds and walks of life.

Life Motto?
Be kind, for everyone you meet is fighting a hard battle.