DeAnna Maganias – An Artist for Our Times Explores ‘Time’ 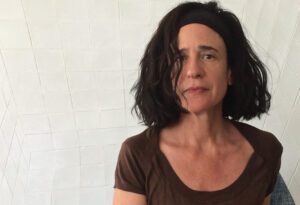 Signs of the resurrection of Omonia Square in the heart of Athens are everywhere – the gorgeous new fountain made possible by private donations, a number of new luxury hotels, the safer environs, to name a few – but one of the area’s hidden treasures is the presence of gifted and dynamic artists who have turned residential and commercial spaces into their studios.

DeAnna Maganias, renowned for her general work, as well as for the moving Jewish Holocaust monument she created for Athens, loves literally being in the epicenter of the capitol of Greece after being born and raised in Washington, DC. “It’s very nice that there are so many artists here,” she said. “It makes for good dialogue,” and creative mutual inspiration and support.

DeAnna is most interested in abstract thinking and the way it is related to the reality of the world – but also to another reality.

She is fired up at the moment about her exhibition at the Rebecca Camhi Gallery in Metaxourgeio, a Well- known art and theater haven, consisting of 94 drawing and titled Η άνοιξη του Ζήνωνα – Spring Paradox 2020. ‘Ανοιξη’ also means both ‘Springtime’ and ‘opening’, suggesting the conceptual windows opened by the philosopher.

“I also like the idea of having Greek and English in the title, so that if they are familiar only with the English, they will look for the meaning of the Greek – I also wanted to include ‘paradox’ and ‘Zeno’ – but not in the same sentence (the Cypriot Philosopher Zeno being famous for his statements of paradoxes).

The first drawing is a perfect square, and it marks the first day of Spring (the season has 94 days, hence, the number of drawings.)

The happenings of 2020 are the background, focusing on the World’s experience of Spring that year.

“Each day is a shape,” DeAnna says, “that evolves from the square into a perfect circle” – ‘circling the square.’

Zeno elucidated his ‘dichotomy’ paradox, where he wonders: given that there are an infinite divisions of space between point A and Point B, how can a person imagine traversing that infinity given our finite lifetimes – “how can we ever commence from point A and arrive at B,” DeAnna asks.

“The exhibition is also a way of thinking about time and its divisions into days, and how in each day, in 2020 in particular, we kind of live a different reality.” She spotlights the transition in our lives from the beginning to the end of last year, “which at the time was almost invisible, but we see in retrospect.” The very shape of our lives changed – and the paintings reflect that, and also the way the pandemic distorted our sense of time – and of space and our relationships.

“Omonia Square was transformed into a Utopia – no one was here. But we were here – I was in the space” – but the crowds and hustle and bustle disappeared, engendering a totally different experience of the space.

Relationships were twisted. As people’s social lives came to a standstill in their neighborhoods and towns, many were drawn closer again to people continents and even decades away in their lives, some relationship being put hold, others dying – and others reviving.

A person’s family backgrounds may or may not impact her life, but for DeAnna it is both essence and inspiration.

Most of Deanna’s family comes from Asia Minor and was directly and indirectly impacted by the Asia Minor Disaster and the various Hellenic and Christian genocides. “I have roots in Smyrna and Pergamum, and that is very important to me. It put me in a position to find a resolution question of the form of the Jewish Holocaust memorial” – the vulnerabilities of diasporas and the loss of wholeness.

The monument is a shattered Star of David – the six triangular protuberances cut off from the central hexagon. “It depicts a splitting apart of a people, and the form, though geometric, is very tender as a concept – the site is turned into a compass as each of the broken pieces of the hexagon point metaphorically to the places where there were thriving Jewish communities for centuries, so it’s very emotional to me” given her Asia Minor background, also the story of lost cities and communities of Hellenes – and so many shattered and lost lives.

DeAnna encourages people to visit the exhibition because there is a ‘physicality’ to the drawings that is lost when viewing photos of them. The drawings give a compelling physicality to the sense of time. “They are really ‘wall reliefs’ – they are drawings on the walls, built up of layers of paper – they have weight … they don’t look the same way in pictures.”

The being of Athens and DeAnna now permeate one another. Living there since the early 90’s, she said, “I’ve always loved Athens. I have a brilliant uncle who is a poet – Stelios Maganias – and at a very early age he introduced me to the Greek intellectual scene that was so inspiring to me, so it just made sense after I finished college to stay here.”

Of course, one needs an independent streak to be able to do that, and DeAnna really wanted to be an artist. The move was a literal first step toward stepping out of the familiar and mundane.

The artist and the city have evolved since she moved there in the early 90s. Athens has become more interesting and livable – the metro, wonderful new cultural institutions, delightful ‘magazakia’ for lounging and dining. “A lot of young people, artists, from all over the world have moved here. It’s a very international city now.”

Her sister, taking a different path, works in IT and lives in Arlington, VA, but DeAnna can imagine life in a parallel universe. In this one, she went to Rhode Island School of Design and spent a year at the Cooper Union before becoming an artist. Her mother’s father, however, like so many Asia Minor refugees, went into the restaurant business, so there is something of a genetic pull on DeAnna from that world. “Things were so different in my mother’s generation, so had I been from hers, I think I would have gone into the culinary arts.”

In this universe she is very happy she was introduced to The Hellenic Initiative through friends. DeAnna, who has donated her art for The Hellenic Initiative silent auctions, loves that THI “is funding progressive ideas and investing in the youth and people who are entrepreneurial, who are willing to take a chance and be creative – that’s important.”

She is confident THI will play a role in bringing back ‘brain drain’ back and notes “there is room for expansion in Athens – so much empty space. And there is a well-educated and enthusiastic young work force who are willing to make sacrifices.”