After a Frightening Diagnosis, ‘A Touch of Life’ Can Make All the Difference. 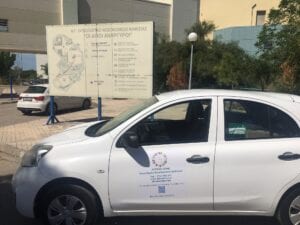 On a practical level, a discussion about Agigma Zois– Touch of Life, an Urban Non Profit Social Care Organization based in Athens’ Kifissia suburb, is about an organization that is a model of effectiveness, but their favorite phrase, “the human touch” does not just reflect its name – it is their key to success.

Agigma Zois is a blend of the professional and the personal, and this philosophy of the power of the human touch was born of the personal experience of its founder, Christina Nomikou, when in 2012 a relative received a cancer diagnosis.

While it is true that there has been tremendous progress in the war against cancer, it is still a terrifying diagnosis, and, unfortunately, the toll on patients and their loved ones of the bureaucratic processes can cause as much pain as the illness. For those whose lives have not been touched by the still-dreaded disease, it is difficult to grasp the value of organizations like Agigma Zois.

In 2012, nothing quite like it existed in Greece, so when Christina needed it, she built it out of her experiences in taking care of another.

Discovering that people weakened and disoriented by the disease often had to also battle the medical and state bureaucracies, Christina’s consciousness came to be dominated by the sacred imperative that, “something must be done. These people cannot be left to their fate,” and she began to surround herself with caring, action-oriented people.

For example, Agigma Zois is able to expedite testing/assessment processes that become stuck for one reason or another. “It should not be possible that someone must die because they could not get a scan done in time.”

While Christina was addressing her family situation she also thought about what could be done for others, and she engaged with existing organizations. Her learning, “was the first stone that was set for the building of Agigma Zois.”

Christina began in the most pragmatic way: she noted what was not ready at hand for her family and others, and moved to obtain it.

At one point, she realized she needed much more information, “but I could not gather it all myself. I needed a person to whom I could say ‘look into this a find a way to deal with it’” – and proceeded to recruit the right one.

Unblocking the bureaucratic path is tantamount to finding an antidote to a nightmare in Greece. Christina explained, “they tell a patient ‘call this person to learn your rights, and what funding you are entitled to,’ but when you call, someone rarely picks up the phone, and when they do, they are not prepared for understanding, and they don’t take responsibility. They often send people running from one office to another and at the end of the day the problem is not solved – they don’t get their medicine or funding.”

Luck is often an element when good things happen, and it turned out that one of the places relevant to the treatment of her relative – Sts. Anargyroi hospital – was near where she lived. There, she was helped by a doctor strongly motivated by his love for his fellow humans.

Step by step her experience enabled Christina to develop a list of what was needed, including material and psychological support and second opinions.

“We succeeded, and our cooperation with the hospital grew closer over time. From 2014 until 2018 we had 36 referrals from the hospital, but by 2018 we were working closely with social service officials there and established a space inside the hospital – we are the first and still the only society with such a presence and in that year we received 261 referrals. In 2020, from the hospital alone we had 523 referrals and through early June 2021 we have already reached 389 referrals.”

“The hospital realized we provided something that even the government had difficulty doing” – at times even the hospital did not have access to certain medicines that Agigma Zoe could obtain. The officials would tell patients ‘go to building D at the hospital and Agigma Zois will help you.’”

The referrals were monitored, and it was observed that the patients gave Agigma Zois favorable reports and doctors saw they were better disposed to proceeding with their therapy once they were free from the anxiety of the bureaucratic process, leading to greater therapeutic success.

The operation aims at quickly establishing the facts and needs of cases and resolving them, and a prime reason for their quantitative and qualitative success, Christina said, was the ability to hire a project manager thanks to The Hellenic Initiative.

The Athens office oversees the Attika region and the remote areas they also serve with special programs in cooperation with local officials, places like Amorgos, Kozani, Lemnos, Corinth, Naxos, Kalamata, and Hydra.

Critical to success in remote areas are educational programs that inform people about the nature of various illnesses. “They gradually they came to trust us and open up about all their ailments and concerns,” Christina said, noting that a long-time doctor on Amorgos told them, “I was aware of 17 sick people, I imagined there were more, who often went to Athens for treatment – but they wouldn’t tell us anything.”

Since cancer is still a taboo in Greece, the organization, “is often the medium, through our volunteers, for conveying information about a patient’s condition to the appropriate doctors and facilities.”

In addition to volunteers, there are two staffers, funded by THI and Desmos, another non-profit organization. Among the initiatives moving forward is their commitment to develop more individualized care – i.e. one volunteer is responsible for all aspects of the relationship with each referral – something that is not common in Greece – and expanding service in remote areas.

Agigma Zois is also developing a pilot program on cancer care they hope will become part of all medical students’ education in Greece, which is vital because doctors in remote areas typically are right out of medical school and are not familiar with the needs of cancer patients.

In the meantime, they will ramp up the number of pandemic-reduced volunteers driving their core mission, people who are both qualified and caring and who, as Christina says, excel at “getting things done … so lives can be saved.”