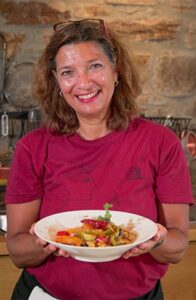 Celebrity chef, teacher, and award-winning cookbook author Diane Kochilas has been called Greek food ambassador and a guru of Greek cuisine. “I wear a lot of different hats,” she says, but at the heart of Diane’s successful endeavors is her appreciation for the fact that – it’s a delicious understatement – “I have taught a lot of people how to cook Greek food.”

“People communicate that to me a lot – Greeks and non-Greeks who married Greeks – that is something I feel really grateful for.”

And the Diaspora and the homeland are grateful because she is a wonderful philhellenic and Diaspora bridge – her contributions constituting real cultural bridges within and between families.

Diane’s many books include enticing titles like: Ikaria: Lessons on Food, Life, and Longevity from the Greek Island Where People Forget to Die; The Greek Vegetarian; Mediterranean Grilling; Against the Grain: More than 150 Good-Carb Mediterranean Recipes; The Glorious Food of Greece; The Food and Wine of Greece; The Country Cooking of Greece, and a “lavishly photographed volume of classic and contemporary cuisine” titled My Greek Table: Authentic Flavors and Modern Home Cooking from My Kitchen to Yours, the companion volume to her popular PBS TV cooking-travel series My Greek Table.

On her website, dianekochilas.com, we learn that, “inspired by her travels and family gatherings, the recipes and stories Diane Kochilas shares in My Greek Table celebrate the variety of food and the culture of Greece. Her Mediterranean meals, crafted from natural ingredients and prepared in the region’s traditional styles – as well as innovative updates to classic favorites – cover a diverse range of appetizers, main courses, and desserts to create raucously happy feasts, just like the ones Diane enjoys with her family when they sit down at her table.”

Over the past year the tables in her homes and the restaurants she works with have for the large part been sadly empty, but Diane – along with her publishers – is delighted that “people are definitely cooking more. Who knows what the means now that restaurants are open again, but people have discovered the joy and satisfaction of cooking at home and taking better care of themselves by eating right.”

She also believes “the pandemic has made people a lot more aware of the connection between diet and health – our physical health and the health of our planet.”

Diane can equally be called Muse of the Mediterranean Diet. “It has been consistently in the news – the last couple of years even more,” she said, given that in recent years there is more and more scientific research backing up its power and value.

“Every year U.S. News & World Report comes out with a list of the best diets for health and the environment and it has been top of that list year in and year out for a while,” she said.

Of course, growing up, she never heard the phrase ‘Mediterranean Diet’ or even ‘Greek Diet’ – she simply enjoyed and helped to create what was simply ‘good food.’

“My dad was the cook in the family – he was a chef, so I grew up around really good food and for most Greeks that is a really important part of family life.”

As she has said, Diane now wears more than just a chef’s hat. Her much-in-demand activities include being consulting chef at popular Greek restaurants in the New York Metropolitan Area, Chicago, Athens, and other locations, regular appearances on American television, and writing  for major international media – including restaurant critic and food columns.

“I also teach in Ikaria” – her parents’ homeland – “where I do ‘life immersion’ programs, the whole ‘Ikarian longevity experience,’” Diane said.

She usually does the classes in Spring, Early Summer, and Fall – this year there were too many uncertainties for Spring, but she will do classes in September. Next year they will be held in May, June, and September – possibly into October.

She also runs a small travel company called Delicious Greece. “I do Athens food walks and culinary excursions to other places in the country. Now that things are open, that is starting up again. It feels good.”

Diane has been in Greece for over 30 years. A “born-and-bred New Yorker,” which accounts for her boldness and energy, Diane now divides her time between New York, Ikaria, and Athens. She continues to lead cooking tours in the United States and has also taught Greek cuisine internationally.

Her love of Greek cooking is blends with her passion for the homeland, its history and culture – and its people. Having lived through the Greek economic crisis, Diane was very happy to learn about the Hellenic Initiative a few years back, and is a fervent supporter.

“Kudos to The Hellenic Initiative for being one of the premier charitable organizations in Greece. There is a lot of creative thinking that goes on in that organization.”

She is impressed that The Hellenic Initiative has gathered many talented Greeks in the Diaspora – especially young Greeks.

“You talk about ‘bridging the gap’ – I think they do that exceptionally well.”

She has also been delighted to offer The Hellenic Initiative Gala silent auction prizes like online classes.

Diane’s fans are looking forward to Season 4 of My Greek Table on PBS – which Diane is working on making happen – and she looks forward to sharing more of her knowledge and passion with the world.