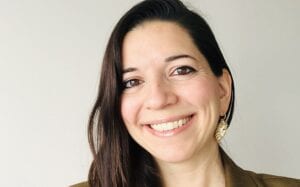 In collaboration with The National Herald and THI have begun a partnership to introduce the NEXTGEN of Greek/Cypriot ‘movers and shakers’ to the rest of our Diaspora community around the world. Established to inform its readers about all things related to our homeland and its respective communities throughout the world, TNH is now providing THI’s New Leaders (40-years-old and younger), with a new platform to showcase their ideas and to engage their communities in a deeper, more meaningful way while simultaneously building a bridge to Greece and Cyprus. Our next featured New Leader is Kaiti Vartholomaios. Get to know her below!

What city do you live in?
New York, NY

Where in Greece are you from?
Kardamyla, Chios

What motivated you to get involved with THI?
When I moved to New York from London a few years ago, a friend recommended The Hellenic Initiative as a way to connect with the city’s Greek community.

I joined the New Leaders shortly thereafter and have never looked back – it is an energized and ambitious organization with very attainable goals. During the pandemic, I was inspired to live more closely to my values, and as a result I became more actively involved in supporting THI’s efforts in and for Greece by joining the New Leaders Executive Committee.

What do you hope to achieve through THI?
The vision that is Greece. The word ‘person’ in Greek is ‘anthropos’ which is derived from ‘ano’ (upward) and ‘throsko’ (to leap), roughly interpreted as ‘to seek betterment.’ By definition, we Greeks need to live in pursuit of our better selves and aspire to our full potential. We are rich with human and natural resources that with a little self-awareness and willful collaboration, could be leveraged into a paradise of innovation, creativity, and abundance for all.

Favorite activity to take part in where you live?
Thanks to COVID19, I have discovered the joys of audio content in an effort to recover from screen fatigue. It was very stimulating to listen to Mr. Andrew Liveris discuss 21st century leadership on Clubhouse! Currently, I am listening to a star-studded reading of the Bible on Audible, and have also discovered some fun Greek podcasts to keep me informed about hot topics back home, including Sousouro and Been There, Done That by Ladylike.gr.

Favorite place to take your non-Greek friends when they visit you in Greece?
An evening performance at the Odeon of Herodes Atticus is an absolute must, followed by late night dinner and drinks. My latest favorite discovery is ‘H Kriti’ in Plaka for raki and mezedakia – it is the oldest mezedopoleio in Athens, on narrow marble steps ascending to the Acropolis, delicious for people-watching. I have passed it a million times, yet only went for the first time last summer. For someone who has spent a large portion of her life in Greece, I continue to be surprised by her hidden corners. I took a cartography course just to make personalized maps for visitors, and often joke that if the Greek National Tourism Organization is ever looking for ambassadors, they should sign me up!

Top three people of Greek/Cypriot descent you admire:
There are so many amazing Greeks that inspire me, however here are three that have been on my mind as of late:

Special mention for Gus Constantellis (IG: @constantlygus) who helped us laugh through the pandemic.

One piece of advice an elder has given you that has proved invaluable?
A single stick can snap easily, but when many sticks are bound together, they become impossible to break. My father would use this metaphor to encourage my brothers and I to get along when we would fight as children. This concept of unity and strength in numbers continues to inform my choices in life; it is one more reason I appreciate THI’s motto of ‘Oli Mazi’.

Favorite quote from a philosopher?
Wisest is she who knows she does not know – Socrates, paraphrased by Jostein Gardner.

One Greek tradition you’ll never stop keeping?
Enjoying life, dancing on tables, and singing to live music at the bouzoukia and panygiria around Greece!