There Are All Kinds of Heroes – Prolepsis

We all need some heroes – no matter how old we are. When the children in Greece are fed by the nongovernmental organization Prolepsis, they get inspiration from the lunch boxes which have pictures of the super heroes of the world of good nutrition: Captain Health, The Fantastic Strawberry, Dr. Tomato, Bravo Broccoli, Cool Carrot, Noble Milk … and Mr. Big Bean.

But if you ask the leaders of Greece’s leading philanthropic organizations, like Afroditi Veloudaki, the General Director of Diatrofi, the dietary-nutritional program of Prolepsis, they will tell you about their heroes too: the Greek Diaspora and institutions like The Hellenic Initiative and their supporters.

The not-for-profit organization Institute of Preventive Medicine, Environmental and Occupational Health Prolepsis was established in 1990 by its Managing Director Athena Linos, MD, PhD, MPH, epidemiologist and professor at the Medical School of the University of Athens. According to its website, prolepsis.gr, the organization “strongly support[s] the belief that health is a fundamental, non-negotiable and inalienable right for every human being.”

Prolepsis began its endeavors by providing pre-clinical examination programs for cancer prevention. They expanded to supporting research and educational programs, including those involving dietary and nutritional issues for which the Stavros Niarchos Foundation provided vital early funds in 2012 which in turn generated matching funds.

Triggered by reports that schoolchildren were looking for food in dumpsters, Prolepsis’ efforts were critical for determining the health needs of Greece’s schoolchildren during its economic crisis and for developing programs for them.

Afroditi said that “in 2012 we set up pilot projects in Athens and Thessaloniki with 6000 children and developed two methods – one involved coupons the children gave to their parents that could be used in specific supermarkets for particular items, but they found that the most effective means of helping them was to provide them with food at their schools.”

THI’s support for Prolepsis began in 2015 and it continues with funds gathered during its 2020 virtual Gala.

In 2015 Prolepsis approached THI to support Diatrofi, first speaking to THI Program Managers Michael Printzos. “We presented the program to THI and I must say that they believed in it from the start. You have good staffers and supporters at many levels.”

The pandemic naturally led to adjustments in their operations. “Before COVID the children were provided a full and healthy meal every day. The first change we made in response to COVID-19 was to prepare a paper lunchbox with pictures of the program’s super heroes. The meals have also been fortified and expanded.” 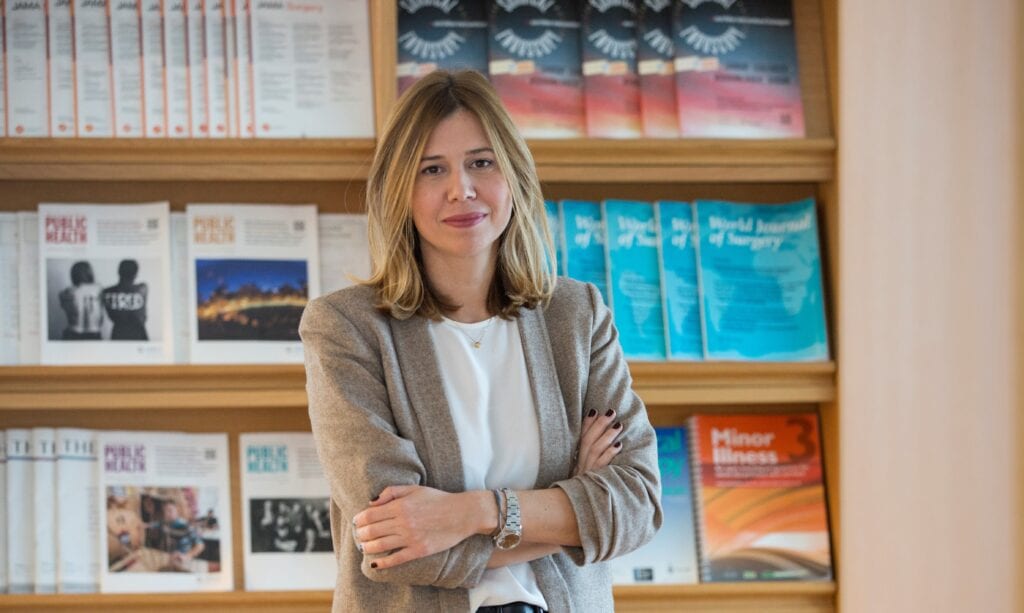 There Are All Kinds of Heroes – Prolepsis

When schools are closed, they prepare bi-weekly food packages containing items and produce that the parents can use to prepare meals. Diatrofi works with school officials who arrange for the parents to come and pick them up along with food preparation and COVID advice.

At this time, Diatrofi serves 3,500 students at 74 schools in several regions in Greece. Since 2012 110,000 different students and more than 688 schools have participated and more than 16 million meals have been served.

“What is special about the program,” said Afroditi, “is that it helps families cover the nutritional needs of their children. The children also learn to eat better, something that benefits them their whole lives. Our scientific studies – which are reflected in published articles – have shown that by researching best practices all over the world we have made progress in the fight against food insecurity, malnutrition, and obesity, which improves the educational and family environment.”

Follow-up with parents and monitoring school practices are keys to Prolepsis’ success in bringing the best of everything to the children.

For older people, there is the ‘Filia se Kathe Ilikia – Friendship for Every Age Group’ program, which was inspired by the ‘Little Brothers – Friends of the Elderly’ organization that was founded in France in 1946 and functions in ten countries, including the United States. “As a member, we learn from their experience and from their technology and methods and we implement them in Greece.”

The program helps with loneliness and isolation. Afroditi said, “we try to connect volunteers with elderly people – not face to face now, due to COVID, but we speak to them by phone. We keep them company and listen to their needs. It is important because loneliness affects the mental and physical health of the elderly.”

With a mother from the Peloponnese and a father with Cretan roots, Afroditi was born in Athens, where she studied communications and mass media, but she also studied in the Unites States on a Fulbright Scholarship. She earned a Masters in Health Communication at Emerson College and the Tufts Medical School. After working for a year at the Kaiser Medical Group, she returned to Greece, where she says she had the good fortune of learning about Prolepsis. She also earned a doctorate at the Medical School of the University of Athens in health journalism.

Regarding COVID she said, “I hope Greece can distribute the vaccines as soon as possible so that we can overcome the pandemic.”

Afroditi concluded the conversation by saying, “I want to send a massive thank you to the Diaspora, because what groups like THI do is very touching, for all that they contribute. For a program like ours it is very important. From 2015 on, THI and THI Canada and THI Australia supported us, and they are truly by our side. Beyond the support and funding, we appreciate the faith THI has in our work, which inspires us and helps us to continue our efforts.”