In Greece, farming is a golden opportunity for individuals and the nation as a whole. The sector has great potential, and modern farming has drawn many young people back to the sacred soil of Greece – but it is a more capital intensive industry than people realize, and the debt load can be crippling.

That is an area where not-for-profit organizations like Proud Farm, can help. They are a group of largely young farmers who envision a sustainable future for Greek dairy, sheep and goat farming. Proud Farm implements important projects, including valuable research and an incubator for the establishment of new farms that are not burdened with debt.

The journey of its president Nikolaos Koltsidas, born and raised in Karditsa in Greece’s Macedonia region, is both fascinating and inspiring. His life demonstrates the maxim that new technology tends to find its market – especially in countries like Greece which have not fully tapped their productive potential – but midwives are needed to give birth to the brave new worlds.

Nikolaos put his education and training in IT and informatics to work right away, distributing electronic identification devices for sheep and goats, working in Greece for a company based in Spain after meeting a team of Spanish veterinarians.

His father, a retired veterinarian, also provided him with direction. “I was in England on a scholarship and when I returned to fulfill my Greek military obligations my father told me that there is great demand for those identification devices, so after doing research, I joined the company in 2006. For the first six months, the Greek headquarters was my room at home – and our turnover was half a million euros.”

In other words, he pioneered the reality that coronavirus has made familiar all over the world.

As Nikolaos developed relationships with farmers, he wanted to help them as much as possible, so he began a collaboration with the Technical Laboratory of the Veterinary School of Aristotle University to support his clients in the management of their animals in ways that would lead to the transfer of know-how.

The relationships were a personal and professional challenge for Nikolaos: the functioning of the farms impacted his reputation, but farmers in Greece tend to be conservative and resistant to change. 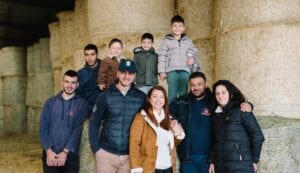 The members of the Proud Farm group, brimming with pride. Nikolaos Koltsidas, the president, proudly wears the group’s cap.

“As soon as I realized it would be difficult to have them follow rules and procedures, I started my own farm in 2014” – but he also learned how to make an impact in other farms.

His experience is indicative of the role universities and other schools can play – but the practitioners have to be astute and creative. “The knowledge we provide must be ‘digestible’ by the farmers. It must be to the point, and solve immediate problems” or show that the practice will yield future benefits.

Greek productivity can grow tremendously in many firms and sectors with information about improved methodology and best practices that can be promoted and implemented by groups like Proud Farm supported by institutions like The Hellenic Initiative. “I believe there is huge potential.”

Nikolaos noted that few people outside farming appreciate that it is a capital intensive sector, but Proud Farm helps farmers make the best of available resources. The EU is very helpful, but he noted that “they don’t put all their effort into a framework that can be used efficiently by the farmers. The variety of funding sources operate in a chaotic way.”

Follow up is also a challenge to new endeavors in places like Greece, but information technology can be a powerful catalyst for change – and it also allows the process to bypass reluctant farmers.

“The economic situation of a farm – its productivity and efficiency – can be a black box. Nobody knows what is going on and what the real costs are, especially on a dairy sheep farm, but we are working with the University of Western Macedonia engineers and a program managed by the American Farm School. We’re preparing proposal for an automated system that gathers information on the income over the feed costs of a farm” through weighing systems that communicate on a daily basis through a web-based application. That allows for more fair pricing and better decision making. “The system is useful for the farmer and useful for monitoring the sector as a whole,” he said.

Nikolaos began his own agricultural endeavor by renting an abandoned farm. “I completely transformed the barn and hired the previous owner who had gone bankrupt. Travelling 150 kilometers per day, I worked with him every day with 200 sheep producing organic milk.”

Ironically, when the original owner saw he could operate profitably, he decided to take back the farm. A friend then invited Nikolaos to bring his sheep to the former’s farm and work together.

That is also when they decided to create Proud Farm – and a plan for an incubator. “All of us faced difficulties in the beginning and we saw that it is difficult for a person to invest in dairy farming. It is hard to recover from the debt” they undertake. “So we began to think of a model that would enable a farmer to begin without any debt, helping people leverage the support available from the EU.” They sequence the EU funding – and Greek government funding – in the most efficient way, and a farm can be established without going into debt.

That is critical because studies done by institutions like the Stavros Niarchos Foundation reveal that most of the young people who tried to start farms during the Greek economic crisis did not succeed, but incubators like Proud Farm dramatically increase the likelihood of success.

Nikolaos learned about The Hellenic Initiative from the American Farm School and when they applied in 2020 for the latter’s first Venture Impact Awards that recognize young enterprises who combine commercial success with helping people on the ground in Greece, they ranked in the top tier and won $30,000.

It’s not just the money that people like Nikolaos appreciate. “It is very valuable that THI exists, that there is an organization that has this vision and mentality. You feel that you are not alone. You know there are people that really care about what happens here in Greece and they want to support it. You can’t solve all the problems, but all these initiatives form a movement and they give us incentives, financial support, and most importantly, inspiration.”