First Annual Venture Impact Awards Benefit 14 Companies that Create Value and Give Back!

The Hellenic Initiative (THI) launched the first annual Venture Impact Awards (VIA) online December 17.  $250,000 in cash prizes were awarded to young enterprises that combine commercial success, job creation and philanthropic support helping people on the ground in Greece. The awards were established by THI with the generous support of the Helidoni Foundation and the Charles C. Condes Trust.

The special Web event was hosted by Marianna Skylakaki, Editor in Chief of athiNEA, and journalist Yiannis Moutsos of MEGA TV and included messages from representatives of each of the winners. There was also a surprise interview with Greek entrepreneurial hero Marcos Veremis.

The VIA strengthens Greece’s brightest and most talented teams that are also committed to social contributions, from helping Greece’s neediest to protecting the environment. When conveying congratulations from the judges THI Board Member Jeremy Downward said they enjoyed reviewing all the materials that were submitted. “The task to select 10 was difficult, and guess what, we failed … there are 14 winners.” THI Executive Director Peter Poulos thanked donors and judges “and all who spent much time preparing,” the endeavor.  THI Program Director Michael Printzos, described the criteria of the awards, whose 14 recipients were grouped in three tiers.

The $30,000 group included: Wise Greece, whose Founder Melina Taprantzi explained helps 100 small farmers progress while also helping people living below the poverty line though food the farmers donate to soup kitchens; Enaleia, which Director and Co-Founder Lefteris Arapakis said cleans the Mediterranean though a network of 700 fishermen who collect plastic that is recycled and upcycled into new products; and the Proud Farm,  a group of largely young farmers whose president, Nikolaos Koltsidas, said produces dairy products goods with respect for the environment, animals and society

Harriette Condes-Zervakis congratulated the award winners and THI and said her uncle, Charles C. Condes, “would be proud of the dynamic ‘Ellines and Ellinides’” – the young Greeks – “who are breathing new life into the Greek economy,” and her son Pete Zervakis, added that “what I want the VIA award winners to know about my grand uncle is that he had a lifelong thirst for learning” and urged them to share that thirst as they move forward.

Dimitris Georgakopoulos Co-Founder of the Helidoni Foundation, said its support for VIA stems from the foundation’s purpose: “to give back to Greece by helping to promote sustainable businesses that create jobs and reverse brain drain … with a broad awareness of the impact they have in their communities … that do well by doing good.”

George P. Stamas, THI’s Board President, stated that the event “demonstrates again that the pandemic can’t hold back THI and it can’t hold back the Greek spirit.” He noted that the VIA, which he called the brainchild of Georgakopoulos and Zervakis, is “a logical extension of the principles on which THI was created: In very difficult times not just to feed people, but to teach them to fish.” 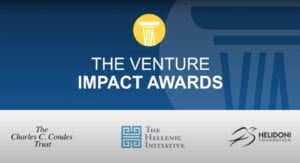