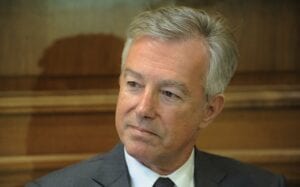 CEO of the Sani/Ikos Group of resorts and president of Marketing Greece Andreas Andreadis. (Photo by Eurokinissi/ Tatiana Bollari)

The Hellenic Initiative offered a timely presentation of its new Digital Speakers series on May 20 as Greece is on the verge of opening for the summer tourism season.

Peter Poulos, Executive Director of THI, welcomed viewers and the featured speakers, Ioanna Dretta, CEO of Marketing Greece, and Andreas Andreadis, CEO of the Sani/Ikos Group of resorts and president of Marketing Greece. Journalist and TNH contributor Sylvia Klimaki, was the moderator from London.

Poulos opened by declaring that, “THI will use all its resources to urge Diaspora Greeks to come home this summer,” and Andreadis began on an optimistic note, saying the Greece’s superior handling puts it in the best pole position for the restarting of tourism.”

Andreadis cut to the chase: “It looks like the travel industry [recovery] is converging around the First of July…adding “it needs to be facilitated by EU and bilateral agreements. The effects of a couple of million or more people visiting Greece will be monitored…for the pandemic to stay at a very low level…tourism will snowball as people on social media talk about what is happening.”

He believes it is possible for Greece to attain as much as one third of last year’s numbers, around 10 million visitors.

Dretta and her colleagues are working hard “to keep Greece at the top of the minds” of people looking to travel, preparing campaigns that will soon be launched.

Klimaki asked if the pandemic is an opportunity for Greece to refocus on the longtime goals of pursuing more high-end tourism and extending the season, even promoting Greece as a year-round destination. Andreadis said “this summer and next, it will not be about price, but about quality, and health – going somewhere safe” and he noted Greece has a big advantage over competitors due to its handling of COVID-19 to date.

Dretta added it must be appreciated that “vacation demand is seasonal…people normally travel in summer,” explaining why “for Greece 70-80% tourism revenue is from summer vacation…but we need to extend the season – early summer and fall are very nice times for Greece.”

Poulos announced, “we have hundreds of questions coming in from people who are watching.” Several people, including John Georges from New Orleans, asked if U.S. citizens will be able to enter Greece in June and this summer.

Andreadis said, “by June 1 government and businesses will announce all the protocols…they will be set by government and accreditation companies.” He added that PM Kyriakos Mitsotakis is ready to open Greek borders without quarantine, depending on the situation in different countries.

The industry leader and pioneer had firm advice for his industry colleagues: “I strongly urge every hotelier to invest their money in the health of their staff and guests and not on reducing prices. It’s a game of trust and quality…that will push more high-end tourists [to Greece] because people will be willing to spend to be protected.”

He emphasized also that the priority must be securing existing bookings and then persuading those people who previously cancelled to rebook for later this year or next year.

Eleni from London asked about differentiating Greece from its competitors and Dretta responded, “our competitive advantage, according to surveys of tourists themselves, is the connections they form with people – either those working in tourism or the locals,” and Andreadis added that, “Greece has the 5th longest coastline in the world – 15,000 kilometers,” so there is space for social distancing, making beaches on the mainland and the islands the ideal refuge from coronavirus.

Klimaki praised Marketing Greece’s innovative Greece from Home campaign about which Poulos said, “people were so proud. It was so well done. Dretta acknowledged “it went crazy and it organically spread all over the world, especially in the United States,” and said the key to success was public-private sector collaboration.

The essence of the next campaign will be `Feeling’, conveying sets of feelings describing the characteristics of the unique Greek Summer, “as something more than just a season.”

Asked by Klimaki what more they would emphasize, Andreadis said Diaspora Greeks should start booking trips by early June for after July 1, ”to send the message they support and believe in their country, voting with early commitments, and to help airlines schedule flights. New bookings need to go into the system in the beginning of June.”

Dretta added, “Greeks around the world are very important multipliers of our message, but while she believes “optimism is a moral obligation,” she cautioned “’Staycation’ is an idea trending now. Other countries are trying to keep those people in their countries to spend their money there,“ making the appeal to the Diaspora even more critical.

Poulos thanked the speakers, the THI New Leaders, and all who joined online, whom he encouraged to visit the “fantastic” website, www.marketinggreece.com. He closed by declaring to Andreadis and

Dretta “we are so proud of you. Our relationship with you and all the work you have done for Greece. Thank you.”

Philhellenes and Diaspora Hellenes are encouraged to visit thehellenicinitiaive.org and donate to COVID-19 The Emergency Response Fund.