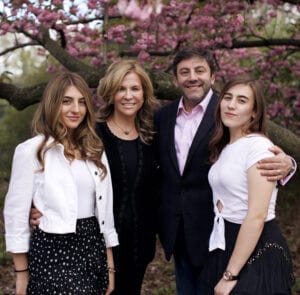 Dr. George Liakeas is one of the most dynamic and beloved members of New York’s Greek-American Community. At the Archdiocesan Cathedral of the Holy Trinity, where he served as Vice President, in his Family Medicine practice and affiliated hospitals in Manhattan, George is always in high demand, as a physician, community leader, and friend.

In March, he suffered a serious case of COVID-19, and thanks to the heroic efforts of his physicians and myriad prayers, he is on the road to recovery, back home with his wife and two daughters – who scold not to talk too loudly or strain himself when they have to – saved by multiple blessings: great doctors, family, and, he believes, people’s prayers.

The latter continue because two months after he was hospitalized, he is still fighting the strange but deadly disease. He has to catch his breath sometimes after every sentence, and he said, “I have numbness going down both my legs. My left foot is ‘on fire’, not pain – it just feels weird. I am easily fatigued and it’s impossible for me to have a normal day of activity – work, chores – but I don’t feel bad. Each time I speak to a doctor, we are winging it. Figuring it out as we go along.”

As a physician he advises people “to appreciate that these things can turn on you” and that if one gets infected “the most important thing is to look at your overall health: remain hydrated, take vitamins – C, D, zinc. When there is vaccine or reliable treatment, we can breathe a sigh of relief, but until then, people should take it seriously and protect the vulnerable age groups and others.”

He then conveyed the hard-earned wisdom of a patient: “If you do get it, be strong. The medical community is smart and getting smarter than ever. And pray. ‘We do what we can and God will do what we can’t,’ as they say.”

And being a Hellene was both inspiring and helpful during his trials and tribulations. The country inspired him. “Greece’s black eye” from the dark days of the economic crisis has been lifted,” he says, especially with the superior handling of the coronavirus crisis. “I can see, watching from America, that Greece has so much to offer and I see it now more than ever.”

He also has a deep appreciation for Hellenism’s age-old values. Like family and community. “I must say one thing about the Greeks in America and Hellenic Medical Society of NY. When I went to the hospital, my wife Nicole didn’t know what to do. She is not a doctor, and nobody is ready for a doctor ending up in the hospital. I was so pleased at how many friends came to her assistance – of course the Andreopoulou sisters – Doctors Panagiota and Eleni – my cousin Dr. Anna Kaltsas…everybody expressed concern” and a willingness to help.

Philotimo, was another value spotlighted by his recent ordeal and was best illustrated by the intervention of Dr. George Yancopoulos, who is on the front lines of the battle for vaccines and treatments at Regeneron Pharmaceuticals.

“Dr. George Yancopoulos not only took Nicole’s call, he spoke to her and my doctors for hours. Not only did he go out of his way, making himself accessible and reachable,” he intervened at a time when the hospital was unsure about what was best. “Dr. Yancopoulos was saying to Nicole ‘we know of a treatment we think is very helpful, and whether it’s our [Regeneron’s] drug or a ‘sister’ drug given by another company, you have to get it to him now! Time is of the essence.”

Things fell into place, Dr. Liakeas said, and Weill Cornell Hospital was willing to give him the sister drug.

“I was better in a day, and now the drug is part of their protocol.”

George, deeply moved, said, “these are the kinds of brains that Greeks have, and these are the kinds of people that Greeks are, that THI has access to. I don’t need to say anything else and I am forever grateful to Dr. Yancopoulos and all of the people involved in my care, who came to my wife’s side, and who prayed for me –  the power of prayer can go a long way, and there are studies that show that if you have these sorts of bonds with others it makes a difference – and our bond is being Greek.”

He has been feeling that bond strongly. “Nicole and I have said, ‘wow we are so proud of how Greece has handled the COVID-19 situation.’” Indeed, they now feel a strange new pull towards the homeland.

“We are Greek-Americans, and this has been a time when many of us have been saying ‘we really look forward to retirement, perhaps early retirement, and to Greece more than ever, because of the ‘pharmako’ – the medicine, which is its sun, its people, its culture and the love.” The antidote to “New York, the rat race of success and expenses and things like that. There is now an odd predilection for going back to our roots…we are looking forward to doing it sooner than later – which is something we did not always believe.”

George know there is concern about the health system, but said “the Greek doctors in general during the COVID-19 crisis and the ones I have met have shown themselves to be top notch.”

And he believes The Hellenic Initiative and groups like HMSNY – he is a past president – can help rebuild and improve the Greek healthcare system.

George’s ever-strengthening feelings for Greece are intertwined with his appreciation of THI.

“THI, unlike many other organizations, really does seem to push the advancement of Greece. People recognize THI as being a leader in that. Other groups are able to mobilize and raise funds for one-time needs, but not necessarily organize for the long term. THI has been doing a wonderful job. I’m very proud of them and I’m proud” to provide financial and moral support.”

“The more I know of THI, the better I like them. They are committed with volunteers from all over,” he said, citing Peter Poulos as just one example of THI leaders he admires. “He speaks so well on behalf of the organization and lends so much to their efforts to be clearly well-run and committed and have everyone be on the same page.” George likes helping to get the word out, saying “awareness is sometimes more than half the battle.”

George concluded the conversation by saying, “I would support THI in any of its efforts, not just in the medical sector. Remember,” he said, “if we help Greek businesses to be strong, the healthcare infrastructure will be strong. There is no reason to be losing doctors to other countries when we can make a difference.”