Omiros D. Sarikas and Brookstreet Equity – Investing in the Future of Greece

A line of entrepreneurs from Asia Minor leads to Omiros D. Sarikas, Founding Managing Partner, and CEO of Brookstreet Equity Partners, a Mayfair-based private equity group, thus he knows about the trials and tribulations of businesses and communities. Omiros and Brookstreet navigate through the challenges and opportunities of a complex world that just became even more so in the COVID-19 era.

With regard to fighting the pandemic, Omiros said, “Greece has been well coordinated during the crisis” and he is optimistic about the economic consequences because “Greek companies have been forced by the previous recession to become leaner and meaner. I think Greek CEOs will nail this crisis because they know how to bootstrap…they have been doing it for over a decade.”

His quest for what was needed for Greece to emerge from its economic crisis drew him to The Hellenic Initiative. “Over the years, I met with several leaders of the Greek-American community like Father Alex Karloutsos, George Logothetis, Andrew Liveris, George Stamas, John Papajohn, and I have reflected about THI since attending my first NYC gala.” 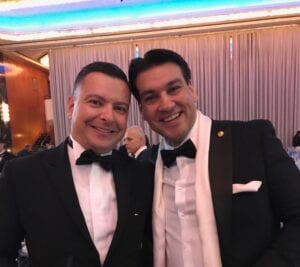 Before THI, he said “we were not aware of another truly global initiative for supporting Greek entrepreneurship which gave reassurance that allocated resources were put to good use. THI provided the eclectic blend of professionalism and fellowship that we wanted to see in a partner.”

THI’s reputation for carefully vetting entrepreneurs, projects, and organizations it supports is deeply appreciated by Omiros, for whom trustworthy networks are of the essence.

Omiros humbly holds the Freedom of the City of London as part of the Livery system of fellowship, charity, and education, being a Liveryman of the Worshipful Company of International Bankers (WCIB) and served as a Committee Chairman, installed by Sir Peter Estlin (former WCIB Master and London Mayor). He was recently appointed to serve as Chairman of the WCIB’s Fundraising Advisory Board. 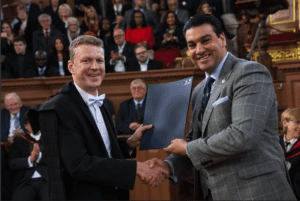 Presenting the WCIB Prize at the University of Oxford

After attending ACS Athens (IB) he followed an English and American education that included LSE/LBS and Harvard amongst others, while working in M&A in London, Zurich, and New York, where he completed complex landmark deals.  Spearheading Brookstreet has enabled him to demonstrate his leadership ability by bringing together “investment bankers, private equity fund managers, strategy consultants, and CEOs with investment appetite for outperformers in asymmetric environments, such as Greece,” he said. “In the middle of the Greek crisis and Brexit,” he continued, “we (with George Bolos at the time) managed to secure a landmark deal for the Athens-based Tickethour and sold it to the American-based Ticketmaster (NYSE: Live Nation). We then decided to unite the financial expertise of London with the Hellenic ecosystem in a large platform. The Principals included C-level professionals that believed in the Greek growth story.”

They created an agile investment group, “and the only one we are aware of that invests in Greece with 100% entrepreneurial capital,” which he believes is strategically important. “We wanted to make sure Brookstreet is a ‘best in class beacon of growth’ so we cherry picked both partners and suppliers which include ‘magic circle’ legals, solid administrators (managing almost half a trillion dollars for funds), budge-bracket bankers, unicorn talent, and extraordinary leaders.”

“We created a global Rolls Royce platform,” Omiros said. “Together with our Partner, Dr. Leonid Schapiro, we engaged hordes of McKinsey alumni in commercial due diligence exercises for each thesis. The aim is to be the leading investor and partner for innovative, high-growth, and extrovert small-cap outperformers. We traced not just startup concepts, but scale-ups; i.e. SMEs who are experiencing transformational growth and can be leveraged by fellow entrepreneurs.”

The sectors Brookstreet has invested in to date include global theses around nanochemicals, industry 4.0 robotics, and security software. For example, Terracom’s SaaS is installed in Heathrow, the largest airport in the world, and in clients in 80 other countries. NanoPhos supplies shipowners globally, and Gizelis Robotics has won awards for factory automations.

Omiros, together with Bolos and Dr. Shapiro, used Brookstreet to disseminate AngloSaxon business practices in Greece and their expertise is just what the doctor ordered for the COVID-19 crisis. “We have been fortunate in addressing COVID-19 early because we acted promptly and decisively. Our firms created revised budgets and business continuity plans, and took appropriate insurance measures. We also paid very close attention to cash flow and financing. Our company CEOs are the real superstars here. They have demonstrated agility and perseverance.”

In response to COVID-19, Omiros said “NanoPhos is creating a novel line of nanotech based cleaning products, whereas Gizelis Robotics is developing a UV sanitizer robot for hospitals and factories – we believe it would be the first in Greece and probably only the second in the world (think Roomba vacuum cleaners). Terracom has software that manages remote workers – and can be used to efficiently deploy doctors and nurses – and which they are offering for free to Hospitals worldwide till the end of the year.”

It is not yet possible to assess the commercial fallout from COVID-19, but Omiros finds some basic concepts helpful. “For those who can plan ahead, volatility creates a lot of opportunity. The size of the pie is smaller, during a recession, but you can get a larger share of it. A lot of industries will be hit, but capital will move to next-gen products/services like nanotech innovations, robotics, automation, security, and remote management. We are “long” in these investment areas and secured platforms which will become national champions and global leaders.”

“Social and business interactions will dramatically change”, he emphasized. “Factories now more than ever need supply that will not be interrupted by human factors, so even smaller production units will consider automation and retrain staff for remote work (for example, design also, rather than only assembly). “Our robotics platform is working on solutions specifically for vertical markets, such as the food industry, from stacking pallets, to supplying inventories.” 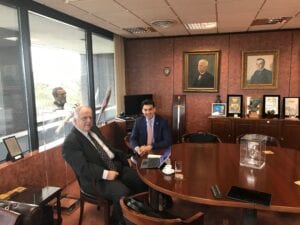 As society and the economy open up again, Omiros looks forward to working with THI to increase its activities in London and Athens and to develop the kind of Hellenic spirit that aims at supporting Greece that is found in the Greek-American community.

“THI can also bridge the gap on how Philhellenes engage with philanthropy and entrepreneurship for Greece. Business and community leaders we work with are proudly affiliated with the program. For example our Greek legal counsel Mr. Papapolitis (of Papapolitis & Papapolitis) is very active in the Initiative. THI creates bonds of trust worldwide.”

Brookstreet Equity have been THI donors through the Corporate Ambassadors program and have supported initiatives such as the Wild Fires Fund and, latterly, the COVID-19 campaign.