Dr. George Yancopoulos, Co-Founder, President, and Chief Science Officer of Regeneron Pharmaceuticals, and Dr. Christos Kyratsous, in charge of Regeneron’s infectious diseases research – leaders of one of the most promising efforts in the battle against COVID-19 – fascinated thousands of viewers worldwide in the premiere of The Digital Speakers Series of The Hellenic Initiative (THI) on May 6.

The hour long interview was co-hosted by THI President George Stamas, Executive Director Peter Poulos, and Chris Goulakos of THI’s New Leaders community, each of whom asked the featured speakers questions, including a number from online participants. THI plans to host webinars frequently on Wednesdays at Noon EDT, free on Facebook and Zoom. Registration is available on Eventbrite

Regarding COVID-19, Yancopoulos said, “Christos set the record for Ebola and now we are counting on him to break his own record,” announcing the precious news that they will soon begin clinical trials with humans. Regeneron also is working on a process to obtain and clone antibodies from humans who have recovered. By June, there will be three kinds of clinical trials: 1) People never infected – injecting antibodies, not a vaccine, thus not having to wait for bodies to react to a vaccine, which helps high risk people; 2) Early Stages of Infection – stopping people from developing severe forms of the disease; 3) Patients on ventilators – These are the toughest cases, but their methods worked with late stage Ebola patients. “Beyond COVID-19 Kyratsous’ hope is that with all the technology in place, humanity is better prepared for the next virus – and to cure other dreaded diseases. He wants the crisis to be a wake-up call uniting humanity to face its challenges, and Yancopoulos hopes it prompts a restoration of respect for science.

When the COVID-19 pandemic began, THI responded by making changes in how it connects with supporters, including two initiatives, the Digital Speakers Series, and THI’s COVID-19 Emergency Response Fund Campaign, which in just a couple of weeks has garnered support from Greeks and philhellenes from all over the globe.

You can watch the video of the discussion here! 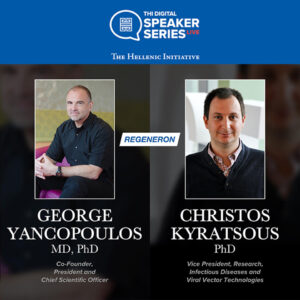