A country’s capital is its gateway to the world, and first impressions are hard to change – a crucial challenge where tourism is a prime industry. With a donation of $15,000, The Hellenic Initiative (THI), in the context of its continuous support in Greece, contributes to the beautification of the historical center of Athens and to the maintenance of its monuments by supporting the anti-tagging initiative of the City of Athens, implemented by the nonprofit organization Athens Partnership (AP), “This is Athens – Polis.”

The program focuses on cleaning the commercial triangle area, which has the highest density of visual pollution from graffiti, as well as on engaging local communities and stakeholders to actively participate in the organization’s initiative.

This program, in cooperation with specialists and the local business community, has managed to clean and maintain an area of 20 acres. Until today, 12 streets in the heart of Athens have already been revived, including the historical building of the Old Parliament House, which houses the National Historical Museum, and many parts of Stadiou Street, a central boulevard in the historical center, visited by millions of people a year. After cleaning, special anti-graffiti material and hydrophobic paint are applied, in order to prevent the reposition of posters and make the cleaning of new visual pollution easier.

The program runs within the framework of This is Athens & Partners, the unique public-private partnership led by the City of Athens. It brings together major stakeholders, including a number of prominent organizations, with the mandate of developing, managing, and promoting Athens as an attractive year-round destination for visitors, residents, professionals, and investors, by introducing a number of wide-ranging projects.

Mr. Drake Behrakis, THI Executive Committee Member, said, “The Greek tourism success story was a vital stabilizing force during the crisis, but it is also prologue to an even brighter future. Unfortunately, one of the most frequent comments of returning tourists is how awful the graffiti is in Athens. We want visitors not only to return to Greece, but to bring friends and family with them, and to consider the country as the site for their companies’ and organizations’ conventions, and for the medical tourism Greece seems to finally be taking steps to develop, and this initiative provides subtle but powerful support similar to initiatives that helped cities like New York make their comebacks.”

Mr. Peter Poulos, THI’s Executive Director, stated: “Visual pollution in historical centers is a great issue amongst most of the major cities around the world. During the past few years, the City of Athens has been implementing a great pallet of initiatives aiming to bring back the former caliber and beauty of the historical center, which image had been affected by visual pollution. Through our long-term collaboration with Athens Partnership, in the Hellenic Initiative we are doing our part in the beautification of the city and we are very proud to be an active member of these efforts.”

Mrs. Anna Zilakou, Managing Director of Athens Partnership, stated: “We are grateful to the Hellenic Initiative for its vital contribution to achieving our primary goal, which is to promote Athens as a contemporary cultural center and an attractive, year-round tourist destination. Having reliable and prominent partners like THI, with whom we can share the same vision for our city’s historical center, always helps in bringing in great results”. 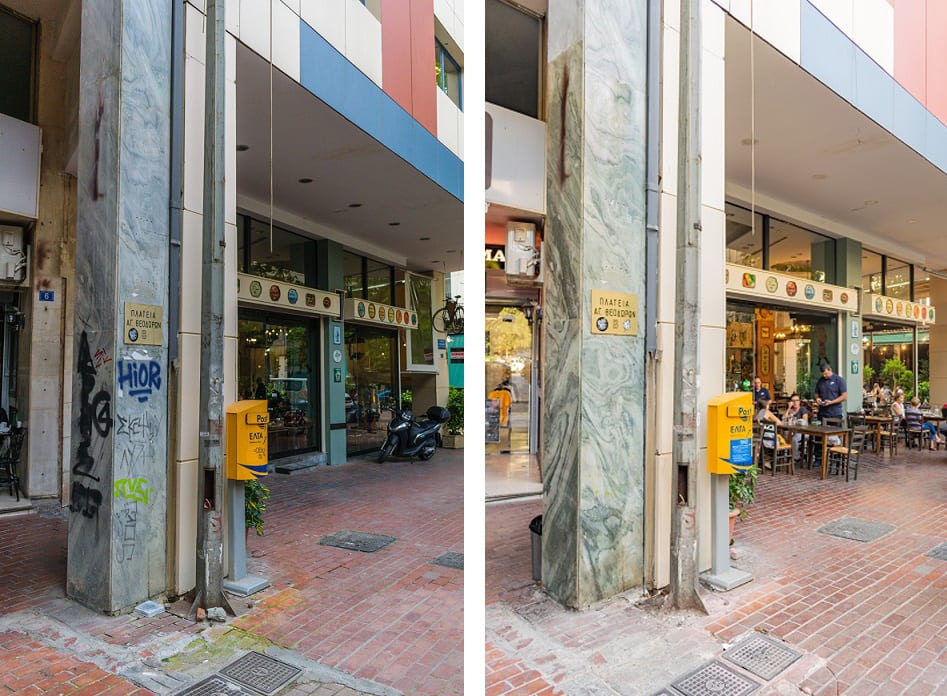 About the Hellenic Initiative
Our Mission: Investing in the future of Greece through direct philanthropy and economic revitalization.
We empower people to provide crisis relief, encourage entrepreneurs, and create jobs.
We are The Hellenic Initiative (THI) – a global movement of the Greek Diaspora.