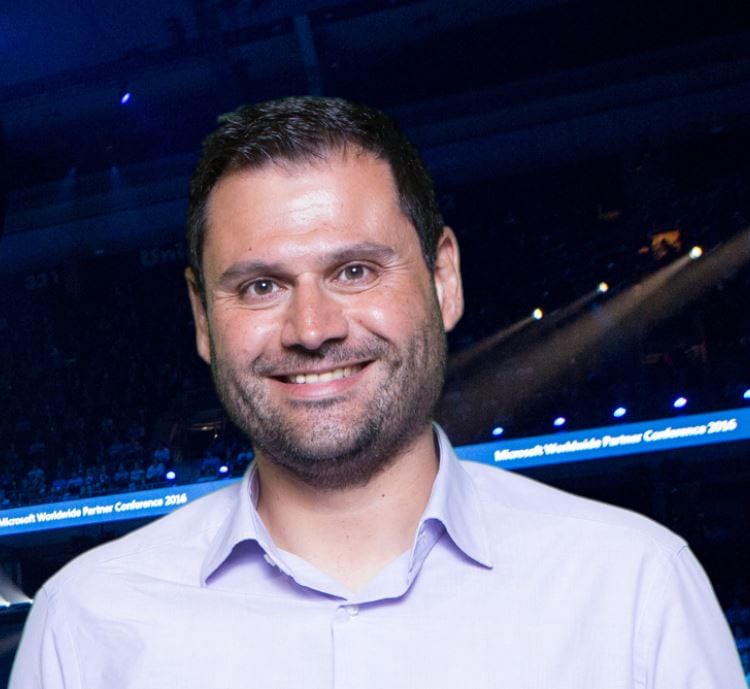 The first things visitors to Pobuca.com see are the maxim ‘Your Growth, Our Responsibility’ and the motto ‘Integrity, Efficiency, Effectiveness.’ Clients quickly discover that the company CEO Isidoros Siderides helped found with his fellow Greek entrepreneurs thrives both because of what they have offer, and their desire to help their clients succeed.

Pobuca’s success in the competitive world of CRN (Customer Relations Management) is driven by its mastery in applying Artificial Intelligence, but since the excitement over AI is matched by the anxiety it generates, we asked Isidoros to share his thoughts with THI’s members.

Not shying away from the dramatic, he said “it’s not just a new technology – it is a turning point for humanity,” perhaps more like the ancient development of writing than the invention of the printing press – or even akin to the advent of language itself.

In solemn tones he said, “there will be a point where AI becomes smarter than we are, 30, 50 years from now – all the scientists agree that at some point this will happen,” but when asked about what Pobuca was doing now with AI, excitement took over shined a light on his corner of the revolution: “we are automating small things in specific domains.”

Pobuca employees are experts in CRM and in campaign management to consumers, from which Isidoros provided an AI example. “If a café owner wants to attract customers AI can get out the word that when they come to watch a popular upcoming sporting event, guests who buy a beer get one free.”

He explained, “you can execute the entire campaign with a bot. In the past, the owner would have to segment the market, prepare the message, and send it out. A bot does that after checking the web and learning about the upcoming event and ‘asking’ the owner if he wants to repeat a previous campaign after ‘reminding’ him of the details of the results of the prior effort. The owner says ‘yes’ and the campaign is done.”

It’s as if the boss had a marketing intern to do the project for him.

“Right now, bots can’t do what humans cannot do, but they are taking over all the boring, repetitive stuff, and as our statement of purpose says, our aim is ‘to unleash business creativity for society and humanity.’ AI does the boring stuff and humans are there to design, to think, to imagine.”

When asked for an example of the benefits of AI in an average person’s life, Isidoros cites Google Maps. “How often has it happened to you that you know how to get where you want ot go, but Google Maps suggests a better route that would never have crossed your mind?”

He said that we can expect from AI that “in almost every field of our lives, because AI has lots of time to analyze data and make decisions that human mind would not bother with,” it will provide people with better results.

Asked what a Bot does better than what one’s brother-in-law in IT could do writing a program, he said: “In short, it’s machine learning,” and explained that one does not program the bot to do specific things. “You provide it with data and algorithms, and then its machine learning through AI.”

Isidoros offered an example ripped from the headlines. “In the old days you had to provide a chess program with all the rules, list all the different possible openings and all the options like, “if your opponent does this, you should make that move. Now, what chess programs do is receive the rules, then they play games against itself – actually they play a trillion games – and find the patterns that lead to wins.” In a brief period of time the program will learn to become a Grandmaster just by observing all those games.

He agrees that combined with another technological revolution, quantum computing, mankind will take another exponential leap by running AI on quantum computers.

Isidoros’ staggeringly promising and thought provoking ominous journey had a humble beginning. Isidoros studied mechanical engineering in Patras, where he said, “I met my Pobuca cofounders back in 2000. In the beginning, we did not have any external funding. Until 2016 we grew organically from our own sales.” They then adapted their business model to the Cloud so they could expand internationally. “We had to repackage our software to make it easily accessible through the Cloud and at that point, we got some investors. We have invested 7 million euros into our products.”

Pobuca is headquartered in the UK and have subsidiaries in Poland, Dubai, and Argentina. One of their investors is Telefonica, the national telecommunications company of Spain. Siderides spends 60% of his time in Athens and most of the rest in London.

Sideridis was born and raised in Athens with roots in Constantinople. His father was a sales manager for Coca Cola. “Hellada is everywhere. Greeks are everywhere,” he said when he noted his brother is also in technology and lives in Hungary.

Isidoros’ skills were not nurtured or developed in school or university – those bored him. “But when I was 21 I began to study the physical sciences on my own, biology, astronomy, physics, and I was amazed by what I was learning.” He won a science competition when he was 36 without any academic connection.

“I love science and the scientific way of thinking. I love biology.” He remembered a biology-inspired article that he finds reassuring. “It says we are not going to have a Terminator, because machines don’t have a Darwinian nature and passions like we do.”

He learned about THI from Program Director Michael Printzos. “Michael found me and sent me an email about it and I sent in an application to participate in Accelerate Greece last year, and in the Venture Fair.”

Talking about how THI can help Greece get through and beyond the crisis, he said, “THI is great, it’s a brilliant idea, for the Diaspora to help entrepreneurs here in Greece and to help them reach out and conquer the world.”

He believes that THI can take even more action than it already has. Asked if he means more efforts to identify companies for it to assist and support, or creating more opportunities for networking and mentoring, for example, he said he wanted to see “more opportunities for success, either by investing in startups or getting them into projects in the U.S. or elsewhere,” and he expressed support for THI moving forward with an investment fund now that it appears that the Greek government is working harder to create an environment that attracts investors.

You can see more of Isidoros Sideris’ ideas in this article: https://www.linkedin.com/pulse/rise-machines-isidoros-sideridis/