Tribe Wearables – Born of a CEO’s Insights, and Help from His Tribe, Including THI

Many of the great entrepreneurial stories have similar paths – most are regular people after all – until the lightbulb moments and life experiences reach a critical mass and there is a flash that shows them the way.
Demetres Stordopoulos’ father worked for an academic publishing house and his mother was an accountant. As is common, his father’s computer fascinated him and set him on a career. Taking a lead from his older brother, he was programming in junior high and by high school was making his pocket money helping people with IT problems. He even created a CRM program for his father’s company.

For individuals, the Greek crisis created both challenges and opportunities.
The job losses sent Greeks who were actually very resourceful into foreign job markets, and some of those who remained attempted their own startups. “Brilliance begins with poverty,” Demetres said.

Their successes can potentially turn brain drain into brain gain as some return with valuable experience to work in those startups.

In Demetres’ case, the crisis might have fortuitously scrambled the usual path to medical treatment he needed. Two years after beginning university he suffered a serious knee injury, around the beginning of the crisis, when the healthcare system was under stress. After three months his doctors shrugged their shoulders and told him “we just don’t know how this happened to you.”

One doctor said, “we don’t have a black box for your accident.” Continuing the airplane data-collection analogy, the doctor noted “actually, we have two problems: we don’t know what was happening in your body up to the point of the event, and second, we don’t know anything about the healing process since the event.”

That is one of the key challenges in physical rehabilitation, Stordopoulos explained. Doctors, trainers, etc. don’t really know what is going on and whether what the patient is doing is working – or even whether he is doing it right – each increasing the risk of greater injury.

Researching about his own challenge and wanting to help injured people in general, he came across the field that addressed the main problems: biomechanical engineering. “It studies what is happening in the body and how to maximize healing and functioning.”

Eventually, Demetres resolved to build his own black box. The biomechanical engineering lab in Komotini is one of the best in Europe, led by Dr. Nikolaos Aggelousis, who took Demetres on a tour and told him all about the 3D cameras and the dots applied to the body that enable the cameras to track its motions in detail, and the floors with force plates. He also learned about sensors on flexible skin patches that show what is happening to the muscles inside the body by detecting their electrical activity.

He was fascinated and thrilled, prompting him to ask Aggelousis, “what if we took all the functionality of this place and put it onto everybody’s body, like a glove.” The response was swift: “that is absolutely crazy and let me explain why.” After listening for almost three hours to Aggelousis about why it was impossible, Demetres politely responded, “I see your point, but what if we actually do it?”

“If you can find the people who are able to help build this,” and scale it down, Aggelousis said he would help.

Demetres began recruiting the people “with the tons of deep and diverse skills in hardware, software, and various technologies.” And he thought about the funding.

“We went to The Openfund” – a venture capital fund then active in Greece – “and we said ‘here’s what we do, here is the idea, here are the markets, and this is the team of world class scientists that is able to do this.’” Openfund believed in them, provided 100,000 euro, and a company was born: Tribe Wearables, which produces Smart Clothing, apparel that gleans information about the body’s functioning that can help healing and training and exercise processes.

“A tribe is what an ancient Greek Olympic games athlete/coach pair was called, and we will be our customers’ tribe to help them achieve their own Olympics,” Demetres said.

After demonstrating a prototype in 2015, Tribe received 400,000 euro more from Openfund to make it wearable for consumers, and angel investors followed. Tribe Wearables is now ready for a new round of fundraising as they are about to announce their first big client, KBS Fashion Group. 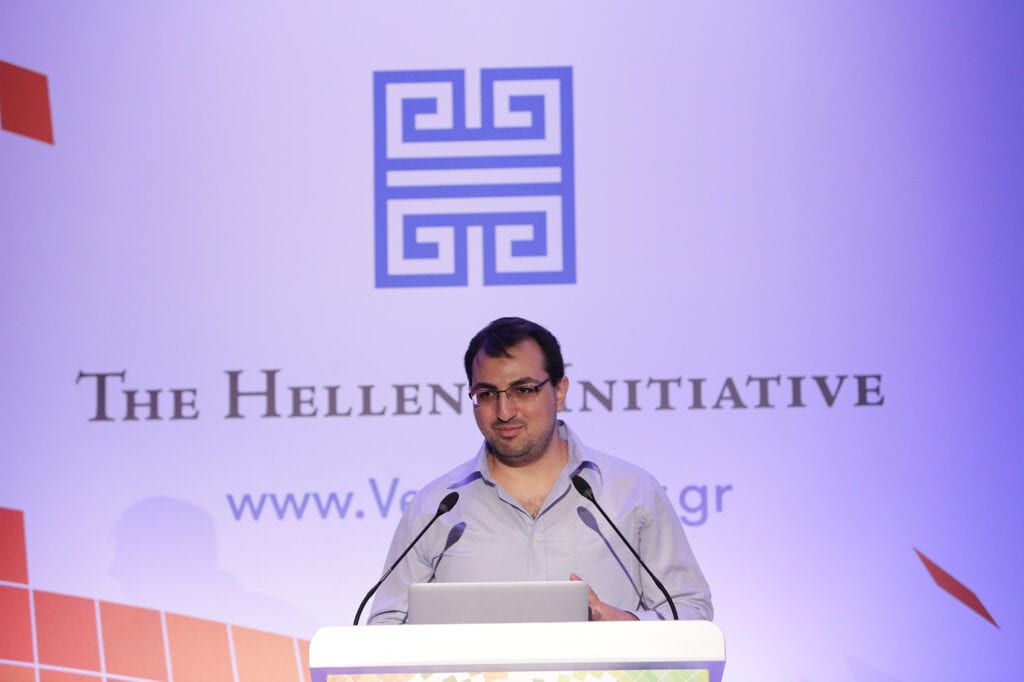 THI PART OF THE TRIBE

Demetres’ success was the result of a combination of his remarkable insights and vision and being able to access good advice – including mentoring from THI.

“I saw the problem clearly: everyone was trying to get the best data from the body, but nobody had a way to do it consistently.” And he knew there was a market from people invested in rehabilitation that is working properly, patients, physicians, coaches – and insurance companies. Armed forces are also interested in the healing and high performance benefits.

The technology is amazing – reflecting the talent of the team – and the track suits and other clothes are attractive, because they are made by top fashion talents.

The devices record 12 muscle groups plus motion and can also track muscle fatigue and symmetry in motion and muscles. Asymmetry leads to over-compensation and overuse. “That’s how you get hurt – 65% of injuries are due to overuse,” he said.

That part he knew well. The fashion world was new to Demetris – but he asked the right questions: “what are the clothes that sell?” He then bought them off the rack and in Komotini the team figured out how to incorporate the sensors.

One of the people at THI’s Venture Fair who had fashion industry expertise gave them vital information and insights about the manufacturing process and other areas and challenges.

“I felt the Philotimo of the people from THI, people who honestly wanted to help. They gave us their brutal, honest opinions, no sugar coating – based on their experience – which was super helpful. That was the best. With THI, they have an emotional investment in it.”

Demetres learned about THI in 2017 and attended its Venture Fair. He was excited about being asked to make a pitch to investors, and about meeting many Diaspora Greeks. “I saw it was possible to branch out into a powerful and dynamic community,” and he liked that THI brings together so many different kinds of people who are bound to connect with some of the young entrepreneurs.

“Through THI we met several people who worked with us. They offered great insights and knowledge about markets and attracting investment. We gained access to a variety of vital viewpoints – the consumer, the investor, the manufacturer – enabling us to see what we were missing. They enabled us to avoid pitfalls and to clarify our message to those we were communicating with – and how to reach out to key people we were missing.”

Demetres is so grateful to THI that he says, “any time they ask me to help, I will do something.”